As a Cancer born on July 3rd, you seem to be very sensitive to the needs of those around you and are more dependable than some people would tend to believe. You are creative and attentive to all sorts of details and it seems that a life choice might come out of this behaviour of yours.

At times, you are very fixed in your decisions. Get ready to understand yourself better below.

Astrological symbol: Crab. The sign of the Crab is influential for those born June 21 - July 22, when the Sun is considered to be in Cancer. It suggests the meticulous and protective nature of the sensible Cancerian.

The Cancer Constellation lies between Gemini to the West and Leo to the East on an area of 506 sq degrees and has Cancri as its brightest star. Its visible latitudes are between +90° to -60°, this being one of the zodiac's twelve constellations.

The Spanish call it Cancer while the Greeks use the name Karkinos for the July 3 zodiac sign but the real origin of the Crab is in the Latin Cancer.

Opposite sign: Capricorn. Partnerships between the Cancer and Capricorn sun signs are considered auspicious and the opposite sign reflects upon the surrounding perceptiveness and practicality.

Modality: Cardinal. This quality indicates the combative nature of those born on July 3 and their courage and social sense regarding most life experiences.

Ruling house: The fourth house. This zodiac placement suggests an influence on stability, family and ancestry. It reveals the areas that attract the most the attention of Cancerians.

Ruling body: Moon. This combination suggests renewal and amazement. Full Moons are culminations of what was started at the new Moon. The Moon is also representative for the affection of these natives' existences.

Element: Water. This element symbolizes renewal and is considered to influence people connected to July 3 zodiac to base their actions more on their feelings and less on reason. Water also gets new meanings in association with fire, making things boil, with air that evaporates it or with earth that shapes things.

Lucky day: Monday. This new day for those born under Cancer is ruled by the Moon thus symbolizes wonder and transition.

More info on July 3 Zodiac below ▼ 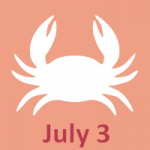 People born on July 3 have a high instinct and are also very connected with their feelings. Of course this doesn't necessarily mean that they control them but they are often aware of what they are feeling and what ticks with them or not. They are attracted by artistic and courageous enterprises although they often choose the easy road of convenience and familiarity because they don't have enough sureness in their own forces.

Positive traits: The natives in this sign put on their sensitive glasses on when it comes to discovering the world they live in and this offers them their unique vision of things. They are attentive, steadfast and artistic and imposing of that. They are surprisingly active and watchful and are great at organizing all kinds of things.

Negative traits: Acknowledging that they damage their life through their fears and that they cannot say they live life at its fullest just in their dreams is a good start for Cancers to balance things. They are manipulative and often react in contradictory ways. They refuse to let go of the past and are often hunted by it for periods and periods of time. They are overly sensitive and seem to put a lot of pressure on those around them with their insecurities.

Love and Compatibility for July 3 Zodiac

Lovers born on July 3 are extremely romantic and passionate. They are also the most protective lovers from the whole zodiac once their own security and stability needs are fulfilled. They have an extra quality in love, they are highly intuitive and usually follow their gut so they are rarely wrong in their choices. They are attracted to creative and imaginative people. You can conquer the heart of Cancer if you know how to offer the support and protection they need and love them unconditionally.

July 3 Zodiac people are very attracted to the other water signs: Scorpio and Pisces as they tend to share the same vision of life. In life, Cancer is constantly seeking for someone who can understand their moody nature and the most suitable to offer them this is the native from Virgo. Cancer is thought to be least compatible with Aquarius. As for the rest of compatibilities between the other star signs and Cancer, you know what they say, stars predispose but people dispose.

The lucky color for those born under the July 3 is represented by silver.

Silver as a hue, is the symbol of change and mystery as it varies between the white and the black just as between two extremes. The zodiac color should be used in items of clothing or objects in the house.

Those with silver as sign color are composed yet energetic people that like to challenge themselves into different endeavors and enjoy learning new things from each experience they go through. The color Silver symbolizes activity, spirituality and insightfulness, therefore this is exactly how Cancer natives are at times.

Other colors indicated for Cancer are violet, blue and pastels.

The Cancer birthstone used in astrology for those with July 3 is the delicate Pearl.

Pearl presents a precious material that reflects preciousness and purity. This zodiac birthstone is advised to be used in pendants and earrings.

This gemstone is said to heal digestive ailments and also to calm the nerves, headaches and lower the tension. Nowadays, cultured pearls have almost completely replaced natural pearls from the markets.

Another precious stone considered beneficial for Cancer natives is Moonstone. It represents sensibility and clarity.

Acanthus is the flower defined for July 3 and in general for Cancer natives.

Acanthus suggests nourishment and grace. This zodiac flower should be used in decorations and other accessories.

This is a precious flower, with purple and white petals oriented towards the sky.

Other flowers representative for Cancer are Water Lilies.

Silver is the representative metal for those born under the July 3.

Silver is one of those metals that denote mystery and sensibility. This zodiac metal should be used in all kinds of jewelry items that are to be worn frequently.

This precious metal reveals the natives tendency towards introspection and pondering on the deeper questions of life. Silver is also malleable and precious and can only bring good spirit to anyone wearing it.

Another metal considered lucky for Cancer natives is Platinum.

In general, those born on July 3 are domestic figures, preferring comfort over excitement although they sometimes become so emotional that they, themselves don't really understand what they want. Their approach regarding love and family is that of going to great lengths for the happiness of those close in a nurturing and long term sacrificing way. Their point of view about the financial aspects of life is that with empowerment and following their intuition, they can go a long way. Speaking about health, as a Cancer, they might have problems with the breast area, ribs, digestive system and lungs.

What do you believe is the best thing people belonging to July 3 were offered by mother nature? Answer this poll and see how many people think like you:

What’s the luckiest feature of the July 3 Zodiac Sign?

July 3 Zodiac belongs to the second decan of CANCER (July 3-July 13). This decan is strongly influenced by the planet Pluto. This is representative for people who are creative and intuitive just like Cancer and focused just like Pluto. This period is said to temper the characteristics of Cancer zodiac sign.

Being born on the 3rd day of the month suggests these people are lively, imaginative and very sociable. The numerology for July 3 is 3. This number reveals great human interactions and all kinds of communication. People ruled by number three sure know their way around words. The association between Cancer and this number will surface eloquence and great people skills in the first.

July is the seventh month of the year, bringing very hot, tense days and holiday time. Those born in July are easy going and affectionate. July 3 Zodiac people are ambitious and imaginative. July has as representative symbols the Larkspur and Water Lilly as plants and Ruby and Onyx as gemstones. The name comes from Julius Caesar, the roman emperor.

What statistics say about July 3 Zodiac?

In a year in the Gregorian Calendar, July 3 is the 184th day or the 185th day in case of leap years and until the end of the year there are left 181 days. The thirty third day of summer, this is also the Emancipation Day as observed in the United States Virgin Islands.

Cancer is placed on the sixth position on the list of birth signs occurrence. Negative polarity and tempting energy, this is an even numbered sign with a predominantly feminine symbolism. This defines introvert people who are discreet and quite firm. Amongst the archetypes used to describe this sign there is the Seductress. Natural born leaders, it is only normal that there are many Cancerians in executive roles.

Does the information on July 3 zodiac describe you?