As a Cancer born on June 21st, you are creative and spiritual but also determined and adventurous. You come in touch with your creativity from a young age and at times you can be boastful about what you do and who you are.

Other times, you are quite reserved and doubting and this helps you strive forward. Prepare to read an outstanding profile analysis in the following rows.

Astrological symbol: Crab. This relates to meticulous and emotional individuals. This is the symbol for people born between June 21 and July 22 when the Sun is considered to be in Cancer.

The Cancer Constellation is one of the twelve constellations of the zodiac. It is quite small spread on an area of only 506 square degrees. It covers visible latitudes between +90° and -60°. It lies between Gemini to the West and Leo to the East and the brightest star is called beta Cancri.

In Italy it is called Cancro and in Greece goes by the name Karkinos but the Latin origin of the June 21 zodiac sign, the Crab is in the name Cancer.

Opposite sign: Capricorn. This means that this sign and Cancer are a straight line across each other on the zodiac wheel and can create an opposition aspect. This suggests positivity and reservation as well as an interesting cooperation between the two sun signs.

Modality: Cardinal. This modality proposes the enthusiastic nature of those born on June 21 and their persuasion and justice in regard to most life aspects.

Ruling house: The fourth house. This means that Cancerians need a space of domestic security where to vent. They are inclined towards familiar environments and ancestry. Cancer also loves to take time and remember cherished memories.

Ruling body: Moon. This planet reflects receptivity and down to earthiness. It also suggests the caution component. In the horoscope chart, the Moon is responsible to all emotional reactions.

Element: Water. This element symbolizes growth and is considered to rule over emotions turning people connected to June 21 zodiac to base their actions more on their feelings and less on reason. Water also gets new meanings in association with fire, making things boil, with air that evaporates it or with earth that shapes things.

Lucky day: Monday. This weekday is ruled by the Moon symbolizing sensibility and fluctuations. It reflects upon the positive nature of Cancer people and the erratic flow of this day.

More info on June 21 Zodiac below ▼ 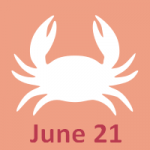 People born on June 21 seem to borrow some of the qualities of the Moon that influences them so they are quite transforming but also very conscious. They have a great imagination and are rapid to catch on things. They have a born need for security and cohesion and once this is fulfilled they can show how truly awesome they are. They can be very assured but are still highly affected by judgment and not being taken seriously.

Positive traits: These natives are like sponges and attract information so don't be surprised if they store a lot of memories in those ingenious heads of them. They are watchful with those around them and truly inquisitive but they also maintain a circumspect distance from things that seem to risky. They are attentive but also have ruler like qualities and all they need is someone to fortify their self sureness to unravel them.

Negative traits: Trying to go past their tendency to dream with their eyes open is one thing these natives have to achieve if they want to accomplish all their goals because they seem to waste more time making all kinds of scenarios than living. They can be difficult, devious and contradictory. They crave for cohesion but they often leave it second spot when they are off chasing some expectations that lack the rational that they've thought of.

Love and Compatibility for June 21 Zodiac

Lovers born on June 21 are extremely romantic and passionate. They are also the most protective lovers from the whole zodiac once their own security and stability needs are fulfilled. They have an extra quality in love, they are highly intuitive and usually follow their gut so they are rarely wrong in their choices. They are attracted to creative and imaginative people. You can conquer the heart of Cancer if you know how to offer the support and protection they need and love them unconditionally.

June 21 Zodiac people are most attached to the other two water signs: Scorpio and Pisces as they tend to share the same vision of life. In love, Cancer is in a constant search for someone capable of unconditional love and understanding and the best to offer them this is the native in Virgo. The least compatible with people born on June 21 are those born under Aquarius. As for the rest of compatibilities between the other star signs and Cancer, you know what they say, stars predispose but people dispose.

Silver is the representative color for those born under the June 21.

Silver suggests mystery but also light, depending whether it is closer to black or white. This zodiac color is advised to be used in accessories and items of clothing.

People who have silver as sign color are imaginative, reserved and intuitive. They know how to act and what to say at any time and in any situation but they tend to remain reserved and focused on their own lives.

Other hues for Cancer natives are violet, blue and pastels.

The Cancer birthstone used in astrology for those with June 21 is the sensible Pearl.

Pearl presents a precious material that reflects preciousness and purity. This zodiac birthstone should be used in pendants, bracelets and other accessories.

This gemstone is said to heal digestive ailments and also to calm the nerves, headaches and lower the tension. Authentic pearls can be found in the sea (natural pearls) or in rivers (freshwater pearls).

Another gemstone considered influential for Cancer natives is Moonstone. It suggests cleanness and sensibility.

Acanthus is the flower of preference for Cancer natives, especially those born under the June 21.

Acanthus is a known symbol of preciousness and nourishment. The zodiac flower could be used in gifts and decorative items.

This is a precious flower, with purple and white petals, towards the sky and influenced by outside forces in the atmosphere, such as the pull of the Moon. This plant can be found during early summer to midsummer.

Other plants for Cancer natives are Water Lilies.

The metal for Cancer natives born with the June 21 is Silver.

This is a metal that symbolizes sensuality and mystery. This zodiac metal should be used in all kinds of jewelry items that are to be worn frequently.

This precious metal reveals the native's tendency towards introspection and pondering on the deeper questions of life. Silver is also thought to bring great humor and liveliness to the person wearing it.

Another metal considered beneficial for Cancer natives is Platinum.

Those born on June 21 are great at dispensing advice in various domains as they are inclined to help others and share their knowledge. Romance and passion might be their attributes but these natives also go a long way ahead and prefer traditional courtship to modern wooing. Money is so very important for these natives as it provides them with both the ability to purchase all they want and offers them peace of mind. Their health is quite good but since Cancer rules the breasts, chest muscles, stomach and pancreas, they are susceptible to ailments concerning these regions, especially stress related.

What do you believe is the best thing people belonging to June 21 were offered by mother nature? This is a poll on this issue that you are invited to answer:

What’s the luckiest feature of the June 21 Zodiac Sign?

June 21 Zodiac belongs to the first decan of CANCER (June 21-July 2). This decan is under the supervision of the Moon. Those born in this period are romantic and protective just like a true Cancer and emotional just as the Moon makes them be. This period is also said to magnify all the positive and negative characteristics of Cancer zodiac sign.

Being born on the 21st day of the month means creativity coupled with intuition and a practical, detail oriented approach to life matters. The numerology for June 21 is 3. This number reveals great human interactions and all kinds of communication. People ruled by number three sure know their way around words. The association between Cancer and this number will surface eloquence and great people skills in the first.

June is the sixth month of the year, bringing light and joviality. Those born in June are active and talkative. June 21 Zodiac people are kind and considerate. June symbols that resonate with these people are Ruby, Alexandrite and Moonstone as gemstones, Oak and Rose as plants and the goddess of family.

What statistics say about June 21 Zodiac?

In the Gregorian Calendar, June 21 is the 172nd day of the year or the 173rd day in leap years, while until the end of the year there are 193 days left. The twenty first day of summer, this is also the World Music Day, International Day of Yoga.

Cancer is said to be the sixth most commonly met zodiac sign in the birth occurrence. Considered to be of feminine symbolism, it has a general negative polarity and is an even number sign. This defines introvert natives who are thoughtful and self-sufficient. An archetype used to describe this sign is the Psychologist. Many of the people born in June or July have chosen science related careers.

Does the information on June 21 zodiac describe you?