Being a Pisces born on March 20th, you are all about change and new experiences. You are relentless and get annoyed by too much calm.

Active and bold during your young years, you eventually decide to settle. In time, you become more and more practical and oriented towards finding solutions to the problems of those around. Prepare to read a special personality report below.

Astrological symbol: Fish. The sign of the Fish is influential for those born February 19 - March 20, when the Sun is considered to be in Pisces. It signifies Divine Consciousness and ambivalence.

In Greece it is called Ihthis and in France goes by the name Poissons but the Latin origin of the March 3 zodiac sign, the Fish is in the name Pisces.

Opposite sign: Virgo. This means that this sign and Pisces are a straight line across each other on the zodiac wheel and can create an opposition aspect. This suggests compassion and diligence as well as an interesting cooperation between the two sun signs.

Modality: Mobile. The modality proposes the creative nature of those born on March 20 and their optimism and modesty in tackling most life events.

Ruling house: The twelfth house. This zodiac placement suggests the starting over after a success or a pitfall and rising each and every time more powerful and with more experience to learn from.

Ruling body: Neptune. This connection suggests intuition and pleasure. It also suggest the creativity surrounding the lives of these natives. The glyph of Neptune combines the cross with three crescents directed above.

Element: Water. This element represents transformation and continuous growth and is considered to determine the mood swings of those associated with March 20 as they tend to support their actions on feelings and less on reason. Water boils things in association with fire, it's vaporized by air and shapes things in combination with earth.

Lucky day: Thursday. This is a day ruled by Jupiter, therefore deals with domination and seduction. It suggests the intuitive nature of Pisces natives.

More info on March 20 Zodiac below ▼ 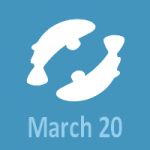 People born on March 20 are original and intuitive and love when they are surrounded by others who are as talented as they are. They also take time to observe what is going with those around them, be it at a human personality level or beyond that. They are easily annoyed by materialistic and selfish individuals and are amongst the first to point them out. They enjoy being par of fancy enterprises that allow them to showcase their potential and they are often quite accepting.

Positive traits: Energetic and quick learners, these Pisces natives have their own lifestyle in many regards. They make faithful and romantic lovers and also insightful and altruistic companions. They are active and bold in their early years but then with age they smooth things with their knowledge and become more confident in themselves.

Negative traits: Capricious and often stubborn, quick to dramatize and rapid to exaggerate what is going on in their lives, these natives want the whole attention to be on them. Unfortunately they are often victims of their own ideals and life principles and rarely know when to temper their behavior and smooth their impulses. They rely on instinct but often prioritize other things ahead. They try to make logical and rational arrangements but their feelings get caught along the way.

Love and Compatibility for March 20 Zodiac

Lovers born on March 20 are creative and adventurous. They love dating and meeting new and exciting persons but when it comes to commitment they avoid any kind of attachment. However, if they ever get struck by love they start acting like fools and their whole world starts revolving around the object of their affection. They are attracted to energetic and fun persons who can keep up with their active and unpredictable lifestyle.

March 20 Zodiac people are very attracted to the other water signs: Cancer and Scorpio as they tend to share the same vision of life. In life, Pisces is constantly seeking for a partner whom to support and motivate them in exchange for their enthusiasm and energy and the most suitable to offer them this is the native from Taurus. Pisces is thought to be least compatible with Aquarius. As for the rest of compatibilities between the other star signs and Pisces, you know what they say, stars predispose but people dispose.

The preferred color for Pisces zodiac is Turquoise.

This ever changing mix, ranging and changing shades appeals and stimulates the creative and visionary Pisces. This combination of watery colors is not only inspiring but surprisingly soothing for Pisces.

Other hues that appeal to people born on March 20 are purple, pink and sea-green.

The sign stone for Pisces zodiac is the irresistible Aquamarine.

Other sign stones that are thought to bring luck to people born on March 20 are Amethyst and Opal.

The representative flower for Pisces zodiac is Water Lily.

Water Lily also symbolizes a sincere and warm hearted nature. This is a flower said to influence emotional responses. The multiple petals focused around the golden center suggest a complex and focused nature.

Other flowers suggestive for Pisces are Jonquil and Violet.

Aluminum is the characteristic metal for Pisces zodiac.

Aluminum suggests invention and innovation. This light weight original metal relates to travel and also has a few connections with spirituality and prosperity.

Another metal considered beneficial for people born on March 20 is Zinc.

Those born on March 20 can be described as efficient and quite demanding from others. They enrich through they openness the lives of others but ask for the same and not always receive. Their behavior at home and in love suggests that they are charming and tactful but can also turn out to be quite despotic when people don't account for their so little wishes. They are often very dedicated to their work and this only makes them find the way to success less frustrating and stressful. Speaking about health, they benefit from a generally good one but might also suffer from some blood circulation problems with age.

What do you believe is the gift people belonging to March 20 were being granted by mother nature? Answer the following poll and see what other's think:

What’s the luckiest feature of the March 20 Zodiac Sign?

March 20 Zodiac belongs to the third decan of PISCES (March 11-March 20). This decan is strongly influenced by the planet Pluto. This is representative for people who are creative and idealistic just like Pisces and focused just like Pluto. This period tempers the positive and negative characteristics of the Pisces zodiac sign, slightly enhancing the negative ones.

Being born on the 20th day of the month shows a person who is patient, task oriented but also imaginative and emotional. The numerology for March 20 is 2. This number reveals balance and partnerships. It is the representative number for the desire of harmony and peace. Those Pisces associated with this numerology can become great mediators and with age they will only turn wiser, gentler and incredibly more considerate to other people.

March is the first spring month in the Northern Hemisphere, bringing the revival and enthusiasm of spring. Those born in March are generous and attractive. March 20 Zodiac people are determined and attractive. The symbols for March include Aquamarine and Emerald as gemstones, Daffodil and Shamrock as plants and Mars, the god of war.

What statistics say about March 20 Zodiac?

Pisces as occurrence in birth signs is considered to be the fourth most popular. Under a definite feminine symbolism, this even number sign is considered to have a negative polarity with deep energy. This relates to introvert people who are reserved and quite strict. The archetype used when talking about this sign is the Medic. These natives don't seem to be very interested in material possessions as they were rated the least earners.

Does the information on March 20 zodiac describe you?