As an Aries born on March 21st, you are bold and fearless but also emotional and caring. You fight for what you want but know when to back up, especially if someone close asks you to.

Imagination will help you go through the difficult times in your life but this is not to say that you are a dreamer, as you prefer to start moving things rather than dream about them. Prepare to read an exceptional personality report below.

Astrological symbol: Ram. This relates to a willful individual that is task oriented but also symbolizes the seeds growing at the beginning of spring. This is the symbol for people born between March 21 and April 19 when the Sun is in the Aries zodiac sign.

The Aries Constellation with visible latitudes between +90° to -60° and the brightest stars Alpha, Beta and Gamma Arietis, is one of the twelve zodiac constellations. It is spread on an area of 441 sq degrees between Pisces to the West and Taurus to the East.

The name Aries comes from the Latin name for Ram, in Greek the sign for March 21 zodiac sign is called Kriya, while in French they call it Bélier.

Opposite sign: Libra. This is important because it reflects upon the independence and honesty of Libra natives who are thought to be and have everything those born under the Aries sun sign want.

Modality: Cardinal. This quality of those born on March 21 suggests revelation and acceptance and also offers a sense of their positive nature.

Ruling body: Mars. This celestial planet is said to influence activity and fearlessness. It is also to be mentioned about the order of these natives. Mars is consistent with Ares, the god of war in Greek mythology.

Element: Fire. This is an element with rich meanings that is said to rule over the enthusiastic people born under the March 21 zodiac sign. Fire as element combines with the other three elements to make things boil, heat them up or model them.

Lucky day: Tuesday. This productive day for those born under Aries is ruled by Mars thus symbolizes emotions and dynamism.

More info on March 21 Zodiac below ▼ 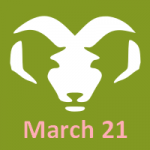 People born on March 21 can be defined as quick learners, explosive temperaments and risk takers who seek for frequent change in their lives. Just like a true Aries they are energetic and ready to start something new at any time. They enjoy taking breaks from their agitated lives for personal improvement time. They hate being asked to do something as they are in no way the zodiac sign to easily comply with what others say, no matter who they are. Competitive work or leisure places are the best environment for those born under this sign.

Positive traits: These are very logical being who are also imaginative in the way they tackle every day activities in their lives. They are ambitious and can only be content when they achieve their goals. They need to have perpetual change in their lives to make them feel alive and this has made them in turn be very adaptable to a lot of things. They can put a lot of effort into many things at once but they also get bored easily.

Negative traits: These natives are undiplomatic and vain at times and they prefer that everyone do as they want. They pretend to be the only ones with the right solutions and they are easily offended by anyone who even tries to say a word differently. They are prone to sadness and even to depression because they prefer to add up frustration each and every time and they never seem to discuss how they feel with anyone.

Love and Compatibility for March 21 Zodiac

Lovers born on March 21 are apparently impulsive but actually sentimental and dependable at heart. They would do anything for the person they choose to stand beside them. They are attracted to mysterious and unpredictable personalities whom can keep the novelty alive in the relationship. You can conquer the heart of Aries by being as driven, dependable and passionate as them. The single Aries is deep into tasks and projects as it has no time to even realize they are single.

March 21 Zodiac people are most attached to the other two fire signs: Leo and Sagittarius as they tend to share the same vision of life. In love, Aries is in a constant search for someone to open their hearts in front of. Someone to whom they can show their emotional side and not be afraid to get disappointed and the best to offer them this is the compassionate Libra. The least compatible with people born on March 21 are those born under the Pisces Zodiac sign. As for the rest of compatibilities between the other star signs and Aries, you know what they say, stars predispose but people dispose.

Red is the color of preference for Aries natives, especially those born under the March 21.

Red suggests prosperity, joy and energy. In some cultures it is said to be used to catch interest. This zodiac color should be used for objects that are sitting in places where these natives spend most of their time.

People who have red as sign color are dynamic, attractive and powerful. They are outstanding personalities, gifted with all it needs to take the lead to success. They are courageous thrill seekers that act on impulse and display an air of know-it-all that catches everyone's attention and interest.

The exquisite diamond is the birthstone defined for March 21 and in general for Aries natives.

Diamond is a precious material that denotes power and elegance. This zodiac birthstone should be used in all kinds of jewelry items that are to be worn frequently.

This gemstone is considered beneficial for brain and glandular diseases and was also said to remove poison. Did you know that colorful diamonds are even rarer that the usual colorless diamond? Because of this natural lack, color treated diamonds have been already manufactured in laboratories.

The lucky flower for those born under the March 21 is Honeysuckle.

This plant is known to symbolize sweetness and delicacy. The zodiac flower could be used in gifts and decorative items.

Iron is the representative metal for those born under the March 21.

This is a metal that symbolizes action and purity. This zodiac metal could be used in accessories and decorative objects.

This strong metal suggests the force of fiery Aries who is easily stimulated as iron is malleable through fire. Iron also has magnetic properties well used by science.

Those born on March 21 can be described as fiery and dedicated individuals who are able to risk a lot of things just to see their dreams and goals to completion. They are completely devoted to their families once they make one and they seem to manage their time very well between their leadership position and their home time. As for the money side of life they tend to use money to keep things moving and don't necessarily regard them as something of extreme value and stability in their lives. Regarding their health, this sign is somehow prone to accidents and should take precautions to avoid accidents involving their upper body parts.

What do you consider is the best thing mother nature gave people belonging to March 21 in order to help them get smoothly through life? Here's a poll you are invited to answer regarding this issue:

What’s the luckiest feature of the March 21 Zodiac Sign?

March 21 Zodiac belongs to the first decan of ARIES (March 21-March 30). This decan is under the supervision of the planet Mars. Those born in this period are passionate leaders just like a true Aries and fiery idealists just as Mars makes them be. This period is also said to magnify all the positive and negative characteristics of Aries zodiac sign.

Being born on the 21st day of the month means creativity coupled with intuition and a practical, detail oriented approach to life matters. The numerology for March 21 is 3. This number reveals great human interactions and all kinds of communication. People ruled by number three sure know their way around words. The association between Aries and this number will surface eloquence and great people skills in the first.

March is the third of the year, bringing the enthusiasm and revival of spring. Those born in March are attractive, loving and fine observers. March 21 Zodiac people are determined and generous. March symbols that resonate with these people are Aquamarine and Emerald as gemstones, Daffodil and Shamrock as plants and Mars, the god of war.

What statistics say about March 21 Zodiac?

March 21 is the 80th day of the year, or the 81st day in leap years, in the Gregorian Calendar and there are 285 days left until the end of the year. The twenty first day of spring, there are many other international celebrations this day such as the International Day for the Elimination of Racial Discrimination, World Poetry Day, World Down Syndrome Day or the international Day of Foreasts, all of these recognized by the UN.

Aries as a common occurrence in the birth signs list is placed ninth. Exuding positive meaning and a dynamic energy, this is an odd numbered sign with a masculine symbolism. This is relevant for extrovert natives who are people-oriented and open. An archetype often used when talking about this sign is the Worthy Opponent. In March and April, there are many births of artists, especially musicians.

Does the information on March 21 zodiac describe you?