Being an Aries born on March 22nd, you are industrious, bold and trustworthy. You don't take no for an answer and often end up convincing others to be on your side as well.

You possess a lot of intuition but at times you don't necessarily make use of it like you should. You seem to be very competitive, especially when you have something to prove. Prepare to read an exceptional analysis below.

Astrological symbol: Ram. This is the symbolism of confidence, wealth and empowerment. It is representative for natives born when the Sun is placed in Aries March 21 - April 19.

The Aries Constellation lies between Pisces to the West and Taurus to the East on an area of 441 sq degrees and has Alpha, Beta and Gamma Arietis as its brightest stars. Its visible latitudes are between +90° to -60°, this being one of the zodiac's twelve constellations.

In Greece it is named Kriya while the French call it Bélier. However, the Latin origin of the Ram, the March 22 zodiac sign is Aries.

Opposite sign: Libra. It is considered that partnerships of any kind between the Aries and Libra sun sign people are the best in the zodiac and highlight generosity and exposure.

Modality: Cardinal. This modality proposes the creative nature of those born on March 22 and their understanding and amazement in regard to most life aspects.

Ruling house: The first house. This house governs the zodiac Ascendant and the earthly presence of an individual. This is why Arieses are focused towards action and also care a lot about how the world around perceives them and their behavior.

Ruling body: Mars. This planet is said to govern over hot temper and confidence and also reflects the diplomacy inheritance. The name of Mars is related to the god of war in Roman mythology.

Element: Fire. This element symbolizes empowerment and confidence and is considered to influence the strength of people connected to March 22 zodiac. Fire also gets new meanings in association with the other elements, making things boil with water, heating up air and modeling earth.

Lucky day: Tuesday. This weekday is ruled by Mars symbolizing intuition and passion. It reflects upon the independent nature of Aries people and the clean flow of this day.

More info on March 22 Zodiac below ▼ 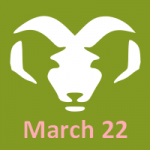 People born on March 22 are incredible at organizing and planning things but this doesn't mean that they are always capable of following their own plans. They prefer for things to stay the way they set them to and hate to compromise, even when it comes to small details. They enjoy being surrounded by a lot of people and they are even more comfortable when some sort of competition is involved.

Positive traits: These are very industrious and energetic persons with a keen temper. They seem to never get exhausted or need any sleep. Aries people are usually resourceful as they seem to get out of any situation easily. They are also very trustworthy once someone wins their affection and respect. Those born under this sign possess a great combination, they are both imaginative and analytical. And if this rare mix doesn't lead to triumph and great achievements, what does?

Negative traits: Learning to accept loss, to realize that people are also prone to being at fault and things sometimes don't go the way they planned is one thing Aries needs to do. Those born on this day are easily insulted, even by the meaningless phrases. They can be quite subjective and selfish and this will destroy some of their group relations in time. They sometimes lose self control easier than could be accepted, even for their fiery energetic behavior. They also represent the most single minded zodiac sign that can possibly be.

Love and Compatibility for March 22 Zodiac

Lovers born on March 22 are impulsive and passionate. They have no time to wait and would do anything to take their passions to completion. They are attracted to enthusiastic and mysterious persons and sparks will fly for a long time if their partner manages to keep up the pace with them. You can conquer the heart of Aries if you're as ambitious and as driven as them. The single Aries is so deep into tasks and projects as it has no time to even realize they are single.

March 22 Zodiac people are most attached to the other two fire signs: Leo and Sagittarius as they tend to share the same vision of life. In love, Aries is in a constant search for someone with whom they can establish a trustful and emotional connection and to whom they can open their souls and the best to offer them this is the compassionate and delicate Libra. Aries is said to be least compatible with those born under the Pisces zodiac sign. As for the rest of partnerships between the other star signs and Aries, you know what they say, stars predispose but people dispose.

Red is the color said to be representative for Aries people born with March 22.

Red as a hue, is the symbol of passion and energy. In some cultures it is used to catch interest. This zodiac color should be used in objects that surround the natives.

This hue is associated with catching attention and danger and fear. It brings focus to the essence of life and survival. On the other hand red is temper and anger so when provoked they tend to get aggressive. This color emanates energy and complete action so it should be used cautiously.

The lucky Aries birthstone for those born under the March 22 is represented by Diamond.

Diamond suggests power and refinery. The zodiac birthstone could be used in accessories and jewelry items.

The flower for Aries natives born with the March 22 is Honeysuckle.

Honeysuckle is a known symbol of delicacy and grace. This zodiac flower is advised to be used for gifts and decorations.

Honeysuckle is the first of the flower signs and comes with energy and determination. This flower can be found during spring time but also in the summer.

Iron is the representative metal for those born under the March 22.

Iron is one of those metals that denote strength and purity. This zodiac metal should be used in all kinds of jewelry items that are to be worn frequently.

Those born on March 22 are usually enthusiastic, independent, generous and loyal, both at home and work. In love they are just as passionate and impulsive as they are in general but can also be very close and emotional when they want to. At work they are usually on a leading position as they are industrious and practical risk takers. They can be overly bossy at times but also entertaining and supportive coworkers when required. Health is generally good with occasional weaknesses involving the upper body such as headaches, eye problems or colds.

With which of the four do you consider those belonging to March 22 are most benefited? You can answer this poll and see what others think:

What’s the luckiest feature of the March 22 Zodiac Sign?

March 22 Zodiac belongs to the first decan of ARIES (March 21-March 30). This decan is strongly influenced by the planet Mars. This is representative for people who are powerful and involved in everything that happens around just like Aries and courageous warriors just like Mars. This decan is said to be magnifying all characteristics of Aries zodiac sign, both positive and negative.

Being born on the 22nd day of the month shows efficiency, confidence, logic and stubbornness. The numerology for March 22 is 4. This number reveals creation combined with logic and a bit of stubbornness. Those Aries associated with number four are surely imaginative but also hard working and critical.

March is the first spring month in the Northern Hemisphere, bringing the revival and enthusiasm of spring. Those born in March are generous and attractive. March 22 Zodiac people are determined and attractive. The symbols for March include Aquamarine and Emerald as gemstones, Daffodil and Shamrock as plants and Mars, the god of war.

What statistics say about March 22 Zodiac?

March 22 is counted in the Gregorian Calendar as the 81st day of the year or the 82nd day in leap years, while until the end of the year there are 284 days left. The twenty second day of spring, this is also the World Water Day, recognized by UN and aiming at raising awareness of the freshwater resources.

Aries is placed on the ninth position on the list of birth signs occurrence. An odd numbered sign, this is full of positive meaning and attached to a masculine symbolism. This relates to extrovert people who are accessible and manageable. One of the archetypes used when talking about this sign is the Worthy Opponent. It seems there are many billionaires born under Aries, making it a sign of wealth.

Does the information on March 22 zodiac describe you?