As an Aries born on March 25th, you have a strong and passionate nature, therefore can often be a bit too temperamental for your own good. You are practical and approach everything with logic, something that is very appreciated by those around you.

Because you know that you tend to lose interest rapidly, you try to challenge yourself every day, even with the smallest of plans. Prepare to read a comprehensive profile analysis in the following rows.

Astrological symbol: Ram. This refers to the golden ram from Greek mythology and is representative for strong individuals who are quick to take action. The sign of the Ram influences people born between March 21 and April 19, when in tropical astrology the Sun is considered to be in Aries.

The Aries Constellation is placed between Pisces to the West and Taurus to the East on an area of 441 sq degrees. It is visible at the following latitudes: +90° to -60° and its brightest stars are Alpha, Beta and Gamma Arietis.

The Latin name for the Ram, the March 25 zodiac sign is Aries. The Greeks name it Kriya while the French say it is Bélier.

Opposite sign: Libra. On the horoscope chart, this and the Aries sun sign are on opposite sides, reflecting courage and warmth and some sort of balancing act between the two with a creation of opposite aspects at times.

Modality: Cardinal. This modality exposes the punctual nature of those born on March 25 and their honesty and caution regarding most existential aspects.

Ruling house: The first house. This is also called the Ascendant. Otherwise it symbolizes the physical presence and how the world perceives an individual. It suggests the beginning in all matters and as Arieses are action people this combination can only empower their whole lives.

Ruling body: Mars. This has as symbolism aspiration and romance. It is also said to influence dynamism element. The Mars glyph is the inverted symbol of Venus, Mars being the masculine energy opposing the feminine one.

Element: Fire. This element symbolizes passion and strength and is considered to rule over enthusiastic and warm people connected to the March 25 Zodiac. Fire also gets new meanings in association with the other elements, making things boil with water, heating up air and modeling earth.

Lucky day: Tuesday. This is a day ruled by Mars, therefore symbolizes vigor and clarity and identifies best with the Aries natives who are enthusiastic.

More info on March 25 Zodiac below ▼ 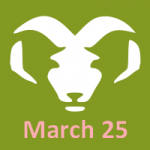 People born on March 25 are direct and shockingly sincere at times. They prefer it when they find themselves in leadership positions, especially when a bit of organizing is involved. At the same time, they refuse to adjust even on the smallest things. They are eager and amicable therefore they are most at ease when accompanied by a lot of people and thrive when there is a bit of competition involved also.

Positive traits: They are adaptable and efficient beings who are also loyal to the people who earn their confidence and respect. Aries people are usually imaginative but also logical in their approach to many aspects of life. Those born under this sign have a keen temper and a quick response to change. Change is also an essential element in their lives as they lose interest quickly and can get bored even faster. What you need to remember is that they are ambitious achievers.

Negative traits: Avoiding unrequited speculations and taking arrangements while also considering the people involved is one thing Arieses need to learn. They need to understand that other people have a word to say and they should be all ears to it. Those born on this day are prone to building up anguish and unworthiness emotions as they are not willing to discuss to anyone about their obstacles and instead they dwell in their own deficiencies. Despite their forceful presentation they are sometimes anguished, insecure and are desirous beings.

Love and Compatibility for March 25 Zodiac

Lovers born on March 25 are sentimental and impulsive and they would do anything for their loved ones once they create a passionate connection. They are attracted to unpredictable and eccentric persons. For pretentious Aries love does not come easy, but as they fall in love they become the walking image of fools in love. You can conquer the heart of Aries if you are just as full of flame and free spirited like them. These people don't mind being single as they keep focusing on keeping their lives busy with their goals.

March 25 Zodiac people are very attached to the other two fire signs: Leo and Sagittarius as they tend to share the same vision of life. In love, Aries is in a constant search for and understanding partner with whom they can connect at a deeper level. The most suitable to offer this kind of relationship to them is the affectionate and loyal Libra. Aries is said to be least compatible with those born under the Pisces zodiac sign. As for the rest of partnerships between the other star signs and Aries, you know what they say, stars predispose but people dispose.

The lucky color for those born under the March 25 is represented by red.

Red symbolizes passion, energy, attention and is the warmest of all colors. This zodiac color is advised to be used in accessories and items of clothing.

Red draws everyone's attention and suggests confidence and action. This is the most suitable color as it is also the symbol for Mars, the ruling planet of the Aries zodiac sign. If they are more tempered you can still recognize them easily for their perseverance and determination in any endeavor.

The birthstone considered to be representative for Aries natives with March 25 is Diamond.

Diamond presents a precious stone that reflects strength and elegance. This zodiac birthstone is advised to be used in pendants and earrings.

The flower considered to be representative for Aries natives with March 25 is Honeysuckle.

Honeysuckle is a plant that symbolizes grace and sweetness. This zodiac flower should be used in decorative items in the places these natives spend time.

Honeysuckle is the first of the flower signs and comes with energy and determination. This flower can be found during spring time but also in the summer.

Iron is the metal said to be representative for Aries people born with March 25.

Iron is one of those metals that denote strength and purity. This zodiac metal should be used in bracelets and other accessories.

Those born on March 25 usually have a youthful appearance and are very confident in their endeavors although they often change their goals really quickly. Their behavior at home and in love suggests they are set to sacrifice themselves for the wellbeing of their loved ones but only to the measure their own expectations are fulfilled. In regard to the financial side of their lives, they are people of action and often are the first to embark onto new projects but at the same time they tend to change objectives really quickly. When it comes to health they have an increased sensibility in the area of their heads and upper body in general.

What do you consider is the gift those belonging to March 25 were being granted by mother nature? Here's a poll about this that you are invited to answer:

What’s the luckiest feature of the March 25 Zodiac Sign?

March 25 Zodiac belongs to the first decan of ARIES (March 21-March 30). This decan is strongly influenced by the planet Mars. This is representative for people who are powerful and involved in everything that happens around just like Aries and courageous warriors just like Mars. This decan is said to be magnifying all characteristics of Aries zodiac sign, both positive and negative.

Being born on the 25th day of the month means creativity coupled with hard work, tenderness and sensitivity coupled with a relatively inflexible nature. The numerology for March 25 is 7. This number reveals thoughtfulness, consciousness and high spiritual values. In association with number seven, Aries becomes reliable, trustworthy and shows great moral values.

March is the first spring month in the Northern Hemisphere, bringing the revival and enthusiasm of spring. Those born in March are generous and attractive. March 25 Zodiac people are determined and attractive. The symbols for March include Aquamarine and Emerald as gemstones, Daffodil and Shamrock as plants and Mars, the god of war.

What statistics say about March 25 Zodiac?

In a year in the Gregorian Calendar, March 25 is the 84th day or the 85th day in case of leap years and until the end of the year there are left 281 days. The twenty fifth day of spring, this is also the International Day of Remembrance of the Victims of Slavery and the Transatlantic Slave Trade.

Aries is placed ninth on the list from most common to least common zodiac sign. It is of masculine symbolism, considered of odd number and with a positive meaning. This suggests extrovert people who are spirited and accommodating. Amongst the archetypes used when talking about this sign there is the Rescuer. Many billionaires are born with Aries as a sign.

Does the information on March 25 zodiac describe you?