Being an Aries born on March 30th, you are temperamental and powerful. Witty and charming, it doesn't take you long to have people on your side.

In your circle of friends, you are some sort of connector because you know so many people and then end up putting everyone in contact. You are very in touch with your emotional side, especially in time. Get ready to better understand your horoscope personality below.

Astrological symbol: Ram. This relates to power, wealth, overall success and tension coupled with peace. This is the symbol for people born between March 21 and April 19 when the Sun is in the Aries zodiac sign.

The Aries Constellation with the brightest stars being Alpha, Beta and Gamma Arietis is spread on 441 sq degrees between Pisces to the West and Taurus to the East. Its visible latitudes are +90° to -60°, this being just one of the twelve zodiac constellations.

The name Aries is the Latin name for Ram. In Greek, Kriya is the name of the sign for March 30 zodiac sign. In Spanish it is also used Aries while in French it is used Bélier.

Opposite sign: Libra. This is the sign directly across the zodiac circle from the Aries zodiac sign. It suggests confidence and change and these two are considered to make great partnerships.

Modality: Cardinal. This quality indicates the thoughtful nature of those born on March 30 and their charm and down to earthiness regarding most life experiences.

Ruling house: The first house. This house rules over the zodiac Ascendant and the physical presence of an individual. It is also the home of initiative and life changing actions. This can only mean that the energetic Aries is inclined to be very attentive with how he/she is perceived by others.

Ruling body: Mars. This planet signifies intuition and honesty and also suggests a impulsiveness nature. Mars is considered to be the yang side or yin which is Venus.

Element: Fire. This is the element that brings a sense of power and integrity to those connected with it such as people born on March 30.

Lucky day: Tuesday. Aries best identifies with the flow of the lucrative Tuesday while this is doubled by the connection between Tuesday and its ruling by Mars.

More info on March 30 Zodiac below ▼ 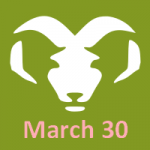 People born on March 30 posses a lot of honesty and they prefer to tell the truth at any time, no matter how hard it sounds. They are independent beings but can also be warm hearted when necessary. Just like a true Aries, they are industrious and need frequent change in order to progress. They like to organize and argument about a wide range of things. They avoid all situations where they have to wait for something to happen. Those born under this sign feel best when they are part of big social gatherings.

Positive traits: These are intelligent and reliable individuals who also posses quite a keen temper. They are full of ideas but they are also critical when the situation requires a bit of analysis. They seem to maintain their attention only on the things that truly interest them and they are overly active at times while putting the greatest price on achieving their goals. They are resourceful, especially when they take things personally.

Negative traits: These natives need to admit their faults and their eagerness and to learn to accept that not everything goes the way they plan it. They are easily insulted and can act in a dramatic way at times, even when opposed just by meaningless words. They can be biased and selfish and they sometimes loose their temper easily. They need to come to terms with their fiery behavior and lose some of the fixed reactions.

Love and Compatibility for March 30 Zodiac

Lovers born on March 30 are apparently impulsive but actually sentimental and dependable at heart. They would do anything for the person they choose to stand beside them. They are attracted to mysterious and unpredictable personalities whom can keep the novelty alive in the relationship. You can conquer the heart of Aries by being as driven, dependable and passionate as them. The single Aries is deep into tasks and projects as it has no time to even realize they are single.

March 30 Zodiac people are very attached to the other two fire signs: Leo and Sagittarius as they tend to share the same vision of life. In love, Aries is in a constant search for and understanding partner with whom they can connect at a deeper level. The most suitable to offer this kind of relationship to them is the affectionate and loyal Libra. Aries is said to be least compatible with those born under the Pisces zodiac sign. As for the rest of partnerships between the other star signs and Aries, you know what they say, stars predispose but people dispose.

The lucky color for those born under the March 30 is red.

Red symbolizes passion, energy, attention and is the warmest of all colors. The zodiac color should be used in items of clothing or objects in the house.

This hue is associated with catching attention and danger and fear. It brings focus to the essence of life and survival. They are courageous thrill seekers that act on impulse and display an air of know-it-all that catches everyone's attention and interest.

The birthstone for Aries natives born with the March 30 is Diamond.

This is a precious stone that symbolizes strength and refinery. This zodiac birthstone could be used in accessories and bracelets.

This birthstone is said to enhance strength, generosity and courage and also keep away any dark forces. Did you know that colorful diamonds are even rarer that the usual colorless diamond? Because of this natural lack, color treated diamonds have been already manufactured in laboratories.

The flower for Aries natives born with the March 30 is Honeysuckle.

This plant is known to symbolize sweetness and delicacy. This zodiac flower should be used in decorative items in the places these natives spend time.

Just like Aries, Honeysuckle is the first of the flower signs and comes with the same energy and determination as the above mentioned zodiac sign. This flower can be enjoyed during spring time but continue until early fall.

Other flowers representative for Aries are Geranium and Ginger.

The metal used in astrology for those with March 30 is Iron.

Those born on March 30 are energetic, independent and generous. They are completely devoted to their families once they make one and they seem to manage their time very well between their leadership position and their home time. Yes, their courageous and positive attitude but also their risk taking habits make them great managers. They should take precautions in order to avoid accidents, especially involving their upper body. Other than that, they keep living hard but their optimistic approach keeps them healthy and thriving.

What do you think is the gift people belonging to March 30 were being granted by mother nature? You can answer this poll and see what others think:

What’s the luckiest feature of the March 30 Zodiac Sign?

March 30 Zodiac belongs to the first decan of ARIES (March 21-March 30). This decan is under the supervision of the planet Mars. Those born in this period are passionate leaders just like a true Aries and fiery idealists just as Mars makes them be. This period is also said to magnify all the positive and negative characteristics of Aries zodiac sign.

Being born on the 30th day of the month shows friendliness, enthusiasm but also reliability and hard work. The numerology for March 30 is 3. This number reveals great human interactions and all kinds of communication. People ruled by number three sure know their way around words. The association between Aries and this number will surface eloquence and great people skills in the first.

March is the third of the year, bringing the enthusiasm and revival of spring. Those born in March are attractive, loving and fine observers. March 30 Zodiac people are determined and generous. March symbols that resonate with these people are Aquamarine and Emerald as gemstones, Daffodil and Shamrock as plants and Mars, the god of war.

What statistics say about March 30 Zodiac?

In a year in the Gregorian Calendar, March 30 is the 89th day or the 90th day in case of leap years and until the end of the year there are left 276 days. The thirtieth day of spring, this is also the National Doctors' Day as observed in the United States.

Aries is placed ninth in order of occurrence on the list of most common to least common zodiac signs. It is of masculine symbolism, considered of odd number and with a positive meaning. This portrays extrovert people who are vivacious and pretty hectic. One of the archetypes used to characterize this sign is the Freedom Fighter. Aries is known as the sign of the billionaires as there are so many born under it.

Does the information on March 30 zodiac describe you?