As a Taurus born on May 16th, you have an altruistic but pragmatic personality. You enjoy helping others but also want to make an impact on their lives and teach them something.

This is why you tend to read a lot and be as knowledgeable as possible. You are a loyal lover and deep inside you have always dreamed of a big family. Prepare to read an exceptional horoscope profile below.

Astrological symbol: Bull. This zodiac symbol is considered to influence those born April 20 - May 20, under the Taurus zodiac sign. It is representative for willful individuals with a lot of stamina and confidence.

The Taurus Constellation is one of the twelve constellations of the zodiac and lies between Aries to the West and Gemini to the East. The brightest star is called Aldebaran. This constellation is spread on an area of 797 square degrees and covering visible latitudes between +90° and -65°.

The Bull is named from the Latin Taurus, the zodiac sign for May 16. In Italy it is named Toro while the Spanish call it Tauro.

Opposite sign: Scorpio. It is considered that partnerships of any kind between the Taurus and Scorpio sun sign people are the best in the zodiac and highlight mystery and resourcefulness.

Modality: Fixed. The modality suggests the honest nature of those born on May 16 and their efficacy and generosity in most life situations.

Ruling house: The second house. This house rules over all material and non material possessions that are important for an individual and seems to influence Taurians in being so attached and indulging.

Ruling body: Venus. This planet is said to govern over maturity and perceptiveness and also reflects the determination inheritance. The Venus glyph is the upright symbol of Mars, opposing its masculine energy.

Element: Earth. This element symbolizes organization and practicality and is considered to rule over confident and polite people connected to May 16 zodiac. Earth also gets new meanings in association with the other elements, modeling things with water and fire and incorporating air.

Lucky day: Friday. Ruled by Venus this day symbolizes relationships and creativity and seems to have the same joyful flow as the lives of Taurus individuals.

More info on May 16 Zodiac below ▼ 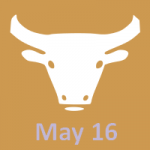 People born on May 16 have a malleable frame of mind and they are usually tender, tranquil, unless they are provoked, just like most of us would. They are to be found surrounded by many material holdings and enjoy spending time with their plenty mates. They also seek to spend time in a distinctive companionship, mostly by potent and imperious people. They try to stay as far as possible from weaknesses and everything that has the slightest bit of air for transformation. They are accommodating and accepting most times.

Positive traits: Imagine a person who is down to earth, loyal and has a sensible approach to all life matters. This is what describes the affectionate Taurus born on this day. Taurus people are known to be dependable and to be those people who finish what they start no matter how many hardships they encounter on their way. Those born under this sign are also hard working and trustworthy individuals.

Negative traits: These natives are prejudiced and indulgent when it comes to their own interests and those of other people. They are materialistic and possessive and should be more careful to the price they put to objects because this can sometimes affect their relationships with real people. They should try and embrace change better because they often seem stuck when something out of the ordinary happens to them.

Love and Compatibility for May 16 Zodiac

Lovers born on May 16 are passionate and committed. They are rather affectionate and stable rather than adventurous and they prefer to settle for a serious relationship rather than date many people. They are attracted to creative and fun people whom can keep their interest alive and with whom they can spoil and protect. You can conquer the heart of Taurus if you are all eyes on them but also maintain your individuality and degree of independence. This single native is not making a drama out of his single status but even enjoys time alone and enters a relationship only when is prepared to.

May 16 Zodiac people are most attracted to the other earth signs: Virgo and Capricorn as they tend to share the same vision of life. In love, Taurus is permanently seeking for an unpredictable companion who can keep his interest alive and the best to offer them this is the native born under Scorpio. The lover in Taurus is said to be least compatible with Aries. As for the rest of partnerships between the other star signs and Taurus, you know what they say, stars predispose but people dispose.

Green is the representative color for those born under the May 16.

Green is a hue that indicates growth and fertility. Grass green is believed to be the most restful color. This hue is placed in great harmony with the moments of calm and shyness of Taurus. The zodiac color should be used in items of clothing or objects in the house.

People having green as sign color are balanced, friendly and down to earth nurturers by choice. Gentle and calm this kind of people tend to handle everything with great care and attention.

Other colors indicated for Taurus are pink, yellow and most earth tones.

The lucky Taurus birthstone for those born under the May 16 is represented by Emerald.

Emerald suggests rebirth, regeneration and is in a strong relation with the goddess of life. The zodiac birthstone could be used in accessories and jewelry items.

This precious material is known to open up the channels of communication and creativity. It can also boost self esteem and faith for the wearer. Colombia, Brazil and Zambia are places where Emeralds can be found.

Another gemstone considered lucky for Taurus natives is Lapis Lazuli. It is the symbol of wisdom and sincerity.

Poppy is the flower of preference for Taurus natives, especially those born under the May 16.

Poppy is a known symbol of elegance and grace of the movement. This zodiac flower could be used in gifts and accessories.

Poppy is also associated with Remembrance Day, the commemoration of the sacrifices made in past wars. This flower can be enjoyed during late spring for about two weeks.

Other flowers representative for Taurus are Violets and Lilies.

The metal for Taurus natives born with the May 16 is Copper.

This is a metal that symbolizes spontaneity and a helping nature. This zodiac metal should be used in all kinds of jewelry items that are to be worn frequently.

Copper reveals a youthful and nurturing nature. One of the first materials discovered by mankind, this metal is said to bring prosperity and influence romantic affairs.

Those born on May 16 can be characterized as domineering and visionary but also understanding and patient. Their approach regarding love and family is an assured and attentive one and they often weigh in both pros and cons and try to make good decisions for everyone involved. They make great financial advisors and their keenness to save and transform will lead them to a wealthy lifestyle. When it comes to health, they are quite sensible with their necks and throats so are susceptible to back pain and catching colds easily.

What do you consider is the gift those belonging to May 16 were offered by mother nature? This is a poll on this issue that you are invited to answer:

What’s the luckiest feature of the May 16 Zodiac Sign?

May 16 Zodiac belongs to the third decan of TAURUS (May 11-May 20). This decan is influenced by the planet Saturn. Those born under this influence combine the connections and ambitions of Taurus with the financial wisdom of Saturn. This period tempers the positive and negative characteristics of Taurus zodiac sign with a great accent on the negative ones.

Being born on the 16th day of the month shows intuition, curiosity, attention and stubbornness. The numerology for May 16 is 7. This number reveals thoughtfulness, consciousness and high spiritual values. In association with number seven, Taurus becomes reliable, trustworthy and shows great moral values.

May is the fifth month of the year, bringing great opportunities for starting courageous endeavors. Those born in May are imaginative and understanding. May 16 Zodiac people are motivated and enterprising. May symbols that resonate with these people are the Emerald and Aquamarine as gemstones, the Lilly of the Valley as plant and the roman goddess of spring.

What statistics say about May 16 Zodiac?

In a year in the Gregorian Calendar, May 16 is the 136th day or the 137th day in case of leap years and until the end of the year there are left 229 days. The seventy seventh day of spring, this is also the National Day, declared by Salva Kiir Mayardit as observed in South Sudan.

Taurus is said to be the seventh most commonly met zodiac sign in the birth occurrence. As a sign of negative polarity, with balanced energy, this is also of feminine symbolism and an even numbered sign. This is defining for introvert natives who are inward-looking and secretive. The Creator is an archetype used when referring to this sign. Less engaged with physical activities, spring birthday people are said not to be so fit.

Does the information on May 16 zodiac describe you?