Being a Taurus born on May 3rd, you are empathic and trustworthy. You chase harmony in everything you do and prefer to focus on one direction.

You seem to build self-esteem in time and the more you subject yourself to diverse activities, the more you learn from them. Sometimes surprising, you like to see how others react to what you do. Prepare to read a comprehensive horoscope profile below.

Astrological symbol: Bull. The sign of the Bull represents people born April 20 - May 20, when the Sun is placed in Taurus. It suggests a willful individual with meaningful strength and stamina.

The Taurus Constellation is one of the twelve constellations of the zodiac, covering visible latitudes between +90° and -65°. It lies between Aries to the West and Gemini to the East on an area of 797 square degrees. The brightest star is called Aldebaran.

The Bull is named in Latin as Taurus, in Spanish as Tauro while the French name it Taureau.

Opposite sign: Scorpio. This sign as the opposite or complementary of Taurus reveals seriousness and diligence and shows how these two sun signs have similar goals in life but they reach to them differently.

Modality: Fixed. Suggests how much resolution and change exists in the lives of those born on May 3 and how loyal they are in general.

Ruling house: The second house. This house rules over all material and non material possessions that are important for an individual and seems to influence Taurians in being so attached and indulging.

Ruling body: Venus. This planet reflects affection and emotions. It also suggests the friendliness component. The Venus glyph is the upright symbol of Mars, opposing its masculine energy.

Element: Earth. This element models things with water and fire and incorporates air. Earth signs born on May 3 are dignified, confident and polite intellectuals.

Lucky day: Friday. Ruled by Venus this day symbolizes beauty and unification and seems to have the same awaited flow as the lives of Taurus individuals.

More info on May 3 Zodiac below ▼ 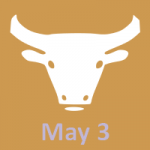 People born on May 3 appreciate the preciousness in everything that is around them from people to material things and crave for stability in most settings. They are quick to use their stubbornness to achieve their goals but they dislike heated situations so they are very tactful when they really want to stay out of conflict. They love to spend time in nature, this being one of the places where they can disconnect and relax. They are in a nutshell persevering temperaments, often more patient than tough.

Positive traits: These natives are aspiring and unfailing but also don't overlook the need to be caring with those dearest to them. They are honorable in most regards and can rapidly empathize with those who catch their scrutiny. Those born under this sign seem to have an attentive vision of life but they are also unhesitating to achieve their objectives, of course once they are fully decided which these are.

Negative traits: These natives can have quite a narrow vision of things sometimes and their stubbornness gets the best of them. This can in turn lead to feeling frustrated and irritable but also to being all lazy because of lack of motivation. They are avoidant at times and prefer to run from problems until they are certain they can't run anymore. They need to learn to accept criticism and temper their reactions in such situations.

Love and Compatibility for May 3 Zodiac

Lovers born on May 3 are sensual and passionate. These natives seem to prefer to enter a serious relationship than date around and are happier committed to one person with whom they can share everything. They are attracted to creative, enthusiastic and dependable persons whom they can spoil and protect. You can conquer the heart of Taurus if you maintain your individuality and a degree of independence while you keep all your eyes on them but also offer them space. When they are single they don't seem to mind solitude as they find it easier to delight on the pleasures of life on their own without having to worry about making their partner feel loved and protected.

May 3 Zodiac people are very attached to the other two earth signs: Virgo and Capricorn as they tend to share the same vision of life. In life, Taurus is in a constant search for someone attractive and mysterious that can keep their interest alive and the one to offer them this is the native in Scorpio. The lover in Taurus is thought to be least compatible with Aries. As for the rest of compatibilities between the other star signs and Taurus, you know what they say, stars predispose but people dispose.

Green is the color that is considered lucky for those Taurus natives with May 3.

This hue denotes growth and healing and represents one of the soothing colors. This zodiac color is advised to be used in accessories and items of clothing.

Other colors representative for Taurus are pink, yellow and most earth tones.

The Taurus birthstone used in astrology for those with May 3 is the magnificent Emerald.

This is a precious stone that symbolizes harmony and growth. This zodiac birthstone should be used in pendants, bracelets and other accessories.

This precious material is known to be able to boost self esteem and faith for the wearer. Did you know that even Queen Cleopatra enjoyed the healing powers of Emerald?

Another gemstone considered beneficial for Taurus natives is Lapis Lazuli. It represents wisdom and truth.

The flower considered to be representative for Taurus natives with May 3 is Poppy.

Poppy suggests refinery and grace of movement This zodiac flower could be used in gifts and accessories.

Few people know that there are also red and purple poppy flowers, not only the famous red ones. This flower can be enjoyed during late spring for about two weeks.

The lucky metal for those born under the May 3 is represented by Copper.

Copper symbolizes spontaneity and creativity. This zodiac metal is advised to be used in pendants and earrings.

Copper reveals a youthful and nurturing nature. This is one the first metals discovered by mankind, it is said to bring prosperity and to influence the expression of emotions.

Those born on May 3 can be described as industrious and successful in their endeavors due to their steady nature and to the way they chase their goals. Their vision regarding their love and family life balances between desires and faithfulness, between offering their partner all their love and being responsible for the family. When it comes to the financial aspects of life, they are great at running their own business if given the chance but are also quite tempted with all kinds of investments. In health, they are attentive to some point and especially forget about taking care of themselves when they are too stressed or too enthusiastic. They weak points are in the area of the neck and upper digestive system.

What do you think is the best thing people belonging to May 3 were being granted by mother nature? By answering this poll you can share your opinion:

What’s the luckiest feature of the May 3 Zodiac Sign?

May 3 Zodiac belongs to the second decan of TAURUS (April 30-May 10). This decan is strongly influenced by the planet Mercury. This is representative for people who are witty perfectionists just like Taurus and communicative spirits just like Mercury. This period is said to temper the characteristics of Taurus zodiac sign.

Being born on the 3rd day of the month suggests these people are lively, imaginative and very sociable. The numerology for May 3 is 3. This number reveals great human interactions and all kinds of communication. People ruled by number three sure know their way around words. The association between Taurus and this number will surface eloquence and great people skills in the first.

May is the fifth month of the year, bringing great opportunities to plant the seeds of success for later in the year. Those born in May are affectionate and understanding. May 3 Zodiac people are strong willed and generous. May has as representative symbols the Lilly of the Valley as plant, the Emerald and Aquamarine as gemstones and the roman goddess of spring.

What statistics say about May 3 Zodiac?

May 3 is counted in the Gregorian Calendar as the 123rd day of the year or the 124th day in leap years, while until the end of the year there are 242 days left. The sixty fourth day of spring, this is also the World Press Freedom Day.

Taurus as occurrence in birth signs is considered to be the seventh most popular. Negative polarity and magnetic energy, this is an even numbered sign with a predominantly feminine symbolism. This describes introvert natives who are reluctant and confident only in own capabilities. The Creator is an archetype used when referring to this sign. It seems spring birthday people are not so keen on sports as they are registered nine per cent less active.

Does the information on May 3 zodiac describe you?