Being a Taurus born on May 9th, you are decisive, witty and passionate about what you set out to accomplish. And you tend to have a lot of plans at all times.

Affectionate and gentle, you care very much about your family and take their needs into consideration all the time, perhaps too much. You also tend to have high and ambitious expectations from yourself. Prepare to read an exceptional report below.

Astrological symbol: Bull. The sign of the Bull influences people born between April 20 and May 20, when in tropical astrology the Sun is considered to be in Taurus. It refers to willful individuals with a lot of stamina and confidence.

The Taurus Constellation is one of the twelve constellations of the zodiac, with the brightest star being Aldebaran. It covers an area of 797 square degrees. It lies between Aries to the West and Gemini to the East, covering visible latitudes between +90° and -65°.

The French name it Taureau while the Italians prefer their own Toro, however the origin of the May 9 zodiac sign, the Bull, is the Latin Taurus.

Opposite sign: Scorpio. This means that this sign and Taurus sun sign are in a complementary relation, suggesting relaxation and extremes and what one has the other lacks and the other way around.

Modality: Fixed. This reveals resourcefulness and rest and also how shy natives born on May 9 are in reality.

Ruling house: The second house. This means that Taurians are twice influenced in their quest for personal possessions and a life of luxury as this house deals with everything that is important to an individual in life.

Ruling body: Venus. This association reveals romance and persistence. The Venus glyph is the upright symbol of Mars, opposing its masculine energy. Venus also shares an insight on productivity.

Element: Earth. This is an element with multiple significances in relationship to the other three as it assimilates air and lets itself be shaped by water and fire. It rules over the sense of justice and awareness of those born on May 9.

Lucky day: Friday. Ruled by Venus this day symbolizes attraction and allure and seems to have the same mysterious flow as the lives of Taurus individuals.

More info on May 9 Zodiac below ▼ 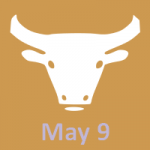 People born on May 9 are constant and tenacious but also very patient and understanding people. Just like a true Taurus, they possess a gentle and relaxed temperament and they are usually peaceful, unless of course they are provoked. They enjoy owning as many material possessions as possible and having friends around at all times. They dislike feelings of insecurity and situations that ask for rapid change. Those born under this sign like to spend time in the highest circles of society, surrounded by very powerful people.

Positive traits: These natives are honorable and charitable and they seem to have quite an attentive vision of life. They are also quite aspiring and unhesitating to see their objectives achieved, although they sometimes take time to figure things out. They are steadfast and unfailing when there is need but also kind and caring at the right moments.

Negative traits: These individuals need to understand that being spiteful doesn't help anyone and that piling up worries only ruins their scrutiny and their joy. They are quite indecisive and indifferent at times although they usually catch up with everything at the last minute. They are also greedy and desirous and sometimes they need a wake up call to see beyond material gain and being attached to material things.

Love and Compatibility for May 9 Zodiac

Lovers born on May 9 are sensual and passionate. These natives seem to prefer to enter a serious relationship than date around and are happier committed to one person with whom they can share everything. They are attracted to creative, enthusiastic and dependable persons whom they can spoil and protect. You can conquer the heart of Taurus if you maintain your individuality and a degree of independence while you keep all your eyes on them but also offer them space. When they are single they don't seem to mind solitude as they find it easier to delight on the pleasures of life on their own without having to worry about making their partner feel loved and protected.

May 9 Zodiac people seem to be most attracted to the other earth signs: Virgo and Capricorn as they tend to share the same vision of life. In love, Taurus is in a permanent search for someone to keep them active and interested and the most suitable to offer them this is the native born under Scorpio. The lover in Taurus is said to be least compatible with Aries. As for the rest of partnerships between the other star signs and Taurus, you know what they say, stars predispose but people dispose.

Green is the color defined for May 9 and in general for Taurus natives.

Green suggests the fertility or nature that regenerates each and every time. Green is a safe color that transmits balance and harmony. This zodiac color should be used in objects that surround the natives.

The birthstone considered to be representative for Taurus natives with May 9 is the beautiful Emerald.

Emerald symbolizes rebirth and is in a strong relation with the goddess of life. The zodiac birthstone could be used in accessories and jewelry items.

This precious material is known to be able to boost self esteem and faith for the wearer. This stone can be found in Colombia, Brazil and Zambia.

Another gemstone considered lucky for Taurus natives is Lapis Lazuli. It is the symbol of wisdom and sincerity.

Poppy is the flower that is considered lucky for those Taurus natives with May 9.

Poppy is a plant that symbolizes refinery and sensibility of the soul. This zodiac flower should be used in decorations and other accessories.

This fiery red flower reveals a classy and elegant individual. This flower can be found during late spring, early summer.

Other flowers for Taurus people are Violets and Lilies.

The metal for Taurus natives born with the May 9 is Copper.

Copper is a metal that suggests healing and creativity. The zodiac metal could be used in accessories and jewelry items.

Copper is a metal of currency and prosperity. This is one the first metals discovered by mankind, it is said to influence emotions and enhance spontaneity.

Those born on May 9 put a lot of accent on safety and on making things right but they also live in the moment and try to enjoy themselves as much as possible. When in a relationship, they offer 110% of themselves and try to please their significant other and when something goes wrong, they are often very disappointed. As for the money side of life, they tend to work their way around even the most difficult situations and even resort to a bit of manipulation to make sure they succeed. Their health is quite strong but since Taurus is said to rule the area of the mouth, neck, throat, ears and thyroid gland, they are prone to suffering from sore throat, muscle spasms and other ailments related to these areas.

What do you believe is the luckiest thing people belonging to May 9 were being granted by mother nature? Answer this poll and see how many people think like you:

What’s the luckiest feature of the May 9 Zodiac Sign?

May 9 Zodiac belongs to the second decan of TAURUS (April 30-May 10). This decan is strongly influenced by the planet Mercury. This is representative for people who are witty perfectionists just like Taurus and communicative spirits just like Mercury. This period is said to temper the characteristics of Taurus zodiac sign.

Being born on the 9th day of the month means compassion, responsibility, affection and a little bit of mystery. The numerology for May 9 is 9. This number reveals change, progress and innovation. In association with number nine Taurus people turn out to be innovative and humanitarian idealists.

May is the fifth month of the year, bringing great opportunities to plant the seeds of success for later in the year. Those born in May are affectionate and understanding. May 9 Zodiac people are strong willed and generous. May has as representative symbols the Lilly of the Valley as plant, the Emerald and Aquamarine as gemstones and the roman goddess of spring.

What statistics say about May 9 Zodiac?

In the Gregorian Calendar, May 9 appears as the 129th day of the year or the 130th day in case of leap years and there are 236 days left until the end of the year. The seventieth day of spring, this is also the Europe Day.

Taurus as occurrence in birth signs is considered to be the seventh most popular. Being an even numbered sign, this exudes a negative polarity and a feminine symbolism. This is defining for introvert people who are reserved and quite formal. The archetype used to describe this sign is the Owner. Rated as nine per cent less active, people born in spring don't really fancy sports.

Does the information on May 9 zodiac describe you?