Being a Scorpio born on November 1st, you seem to possess a great intuition but you also deny listening to it in favour of pursuing what others may be doing.

You want to feel that you are belonging to a group but when you will eventually find your calling, you will be capable of great things on your own. Get ready to better understand your horoscope personality below.

Astrological symbol: Scorpio. The sign of the Scorpio represents people born October 23 - November 21, when the Sun is placed in Scorpio. This reflects mystery, secret desires and power coupled with hidden aggression.

The Scorpio Constellation with visible latitudes between +40° to -90° and the brightest star Antares, is one of the twelve zodiac constellations. It is spread on an area of 497 sq degrees between Libra to the West and Sagittarius to the East.

The name Scorpio is the Latin name for Scorpion. In Spain, Escorpion is the name of the sign for November 1 zodiac sign, while in Greece and France they use Scorpion.

Opposite sign: Taurus. On the horoscope chart, this and the Scorpio sun sign are on opposite sides, reflecting critique and persistence and some sort of balancing act between the two with a creation of opposite aspects at times.

Modality: Fixed. The modality exposes the broad minded nature of those born on November 1 and their diligence and stubbornness in regard to most existential aspects.

Ruling house: The eighth house. This house rules over the material possessions of others and the struggle of one's individual with his wishes and suggests why these have always played an important role in the lives of Scorpios.

Ruling body: Pluto. This celestial planet reveals ardor and faithfulness and also highlights depth. The Pluto glyph represents a circle over a crescent and a cross.

Element: Water. This element reveals the flair and sensibility of people born on November 1 but also their passivity and acceptance at times. Water couples with fire to make things boil, models things with earth and dissipates in the presence of air.

Lucky day: Tuesday. Scorpio best identifies with the flow of the devising Tuesday while this is doubled by the connection between Tuesday and its ruling by Mars.

More info on November 1 Zodiac below ▼ 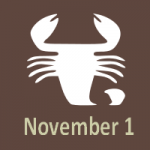 People born on November 1 are forceful willed and very convivial. They appreciate being be all listened to and love to be in the spotlight. While they might appear as bull headed and selfish, they can also be very accepting with those with whom they feel the need to be like that. They avoid commonness at all costs and hate when they are not in control of a situation. They love to engulf their lives in a bit of enigma.

Positive traits: These natives are inquisitive about a lot of things and posses a vast knowledge but are also quick to start all kinds of discovery endeavors. They are very private about many things but are also poised and loyal so they make in general very trustworthy friends. Once someone wins their respect and maintains it they usually have it for better or worse as they are very respectable when it comes to these things.

Negative traits: Scorpio needs to learn to stop being so patronizing and understand that people can do better when addressed nice words and when they are not under total supervision. Those born on this day are jealous and possessive with those they care about and can be very cruel with people who deceive or make any mistake to them. They are very resentful when sometimes disappoints them. They rarely forget and forgive.

Love and Compatibility for November 1 Zodiac

Lovers born on November 1 are passionate and secretive. They enjoy dating rituals and keeping an aura of mystery on their lives. They hardly connect with someone at a deeper level but when they do, they open their minds completely. They are attracted to sensual partners who know how to handle them and know how to combine praising with criticism. You can conquer the heart of Scorpio if you dedicate your life to understanding their complex parade of emotions and also to supporting their impulsive decisions.

November 1 Zodiac people seem to be most attracted to the other water signs: Cancer and Pisces as they tend to share the same vision of life. In love, Scorpio is in a permanent search for a loving and careful partner and the most suitable to offer them this is the native born under Taurus. The lover in Scorpio is said to be least compatible with Libra. As for the rest of partnerships between the other star signs and Scorpio, you know what they say, stars predispose but people dispose.

Deep red is the lucky color for Scorpio zodiac.

The shades of red belong to a color of initiative and attention. It both stimulates and relaxes Scorpio so they are inclined to choose to surround with many objects of these shades.

Other colors preferred by people born on November 1 are violet, scarlet and carmine.

The birthstone for Scorpios is the elegant Topaz.

This material is said to channel energy on stimulating the innate characteristics of an individual and on revealing new ways of interaction with the outside world. Topaz also symbolizes inner strength and constancy.

Other gemstones that are considered beneficial for people born on November 1 are Onyx and Garnet.

The lucky flower for Scorpio zodiac is Chrysanthemum.

This is a flower thought to clear negative energies from around it so it can be used as a joyous decoration or even as a lucky charm. Chrysanthemum also suggests meditation, introspection and warmth.

Other flowers suggestive for Scorpio are Geranium and Roses.

Iron is the metal considered lucky for Scorpio zodiac.

This metal suggests the strength and determination of the true Scorpio. These natives need to be handled with care just like iron rusts if left in moist air.

Another metal thought to be lucky for people born on November 1 is Silver.

The personality of those born on November 1 is in a nutshell mysterious and demanding. They keep their expectations high and are often very subjective about a lot of things. Their attitude towards love and family suggests that they care deeply about a lot of aspects in love and often feel hurt if they are not being listened to. As for the money side of life, they are self motivated and know how far they can get and this is exactly what they pursue in life. Health is an important aspect for them although they sometimes tend to overlook the small signs their bodies give them.

You are invited to answer a poll regarding the area of life in which you think those belonging to November 1 have the least to worry:

What’s the luckiest feature of the November 1 Zodiac Sign?

November 1 Zodiac belongs to the first decan of SCORPIO (Octombrie 23-November 2). This decan is under the supervision of the planet Pluto. Those born in this period are mysterious and sensual just like a true Scorpio and focused and possessive just as Pluto makes them be. This period is also said to magnify all the positive and negative characteristics of the Scorpio zodiac sign.

Being born on the 1st day of the month shows a lot of independence, loyalty and energy. The numerology for November 1 is 1. This number reveals revels leadership qualities, great will power and an original approach to life, all wrapped in a charming personality. Those Scorpio can only be proud of this association as this is the number of achievers, of those who see the bigger picture and are set to follow their goals no matter what.

November is the eleventh month of the year, bringing the opportunity to stock experience and knowledge. Those born in November are brilliant and attractive. November 1 Zodiac people are dynamic and stubborn. November symbols that resonate with these people are Citrine and Topaz as gemstones and the Chrysanthemum as a plant. The name of this month comes from the Latin “novem”.

What statistics say about November 1 Zodiac?

In a year in the Gregorian Calendar, November 1 is the 305th day or the 306th day in case of leap years and until the end of the year there are left 60 days. The sixty second day of autumn, this is also the National Bison Day in the United States.

Scorpio is the first zodiac sign in order from most common to least commonly met. Considered to be of feminine symbolism, it has a general negative polarity and is an even number sign. This exemplifies introvert people who are withdrawn and confident only in own power. The Mystic is an archetype used when referring to this sign. Scorpio natives are better than other people when it comes to athletics.

Does the information on November 1 zodiac describe you?