As a Scorpio born on November 18th, you have a flexible but constant personality. Everything you do has a reason, and this is often linked to the betterment of yourself and those around.

You seem to find it natural to pursue creative endeavours and find an instant connection with people of the arts. In time, you will become an expect at recognizing opportunities of all sorts. Prepare to read a special personality report below.

Astrological symbol: Scorpion. This symbol suggests secret desires, mystery and power coupled with hidden aggression. It is characteristic for people born between October 23 and November 21 under the Scorpio zodiac sign.

The Scorpius Constellation is one of the twelve constellations of the zodiac, covering visible latitudes between +40° and -90°. It lies between Libra to the West and Sagittarius to the East on an area of only 497 square degrees. The brightest star is called Antares.

The name Scorpio is the Latin definition for Scorpion, the November 18 zodiac sign. The Greeks call it Scorpion while the Spanish say it is Escorpion.

Opposite sign: Taurus. This means that this sign and Scorpio are a straight line across each other on the zodiac wheel and can create an opposition aspect. This suggests resourcefulness and positivity as well as an interesting cooperation between the two sun signs.

Modality: Fixed. This indicates the creative nature of people born on November 18 and that they are evidence of determination and faithfulness.

Ruling house: The eighth house. This house placement symbolizes material possessions; life's hidden pleasures and the ultimate transformation of death. This says a lot about the interests of Scorpios and their life perspectives.

Ruling body: Pluto. This celestial planet is said to influence equilibrium and flexibility. It is also to be mentioned about the passion of these natives. The name Pluto comes from the god of the underworld in Roman mythology.

Element: Water. This element sheds light on the constant but flexible approach of those born under the November 18 zodiac sign. It is also said to influence these individuals in recognizing the opportunities around them and in pursuing them naturally just like water flows.

Lucky day: Tuesday. This warm day for those born under Scorpio is ruled by Mars thus symbolizes affection and buoyancy.

More info on November 18 Zodiac below ▼ 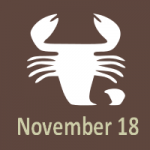 People born on November 18 are opinionated and hard working. They appear to be most charming to everyone they come across with. Just like a true Scorpio, they are emotional, mysterious and sometimes even tolerant. They like to enroll in artistic endeavors and to be surrounded with people whom truly listen to what they have to say. They avoid being confronted with opponents and hate being deceived, especially by persons close to them. Those born under this sign feel best when surrounded by close and trustworthy friends.

Positive traits: These natives possess some great multitasking skills and try to exert them almost all the time by trying to be in charge with everyone that is going on around them. They are determined and often show an almost hypnotic determination in changing the minds of those around them. They can be quite surprising sometimes with their train of thought but they can also be of a boring predictability when they follow their principles. They are curious and love exploring and are often one a jovial company.

Negative traits: Jealous and most possessive, these natives need to learn to cool things those with those whom they care about because otherwise their overly attached manner of taking things might have a higher influence that they can imagine. They shouldn't as well let past mistakes hunt them down because this is what they do and really stops them from enjoying themselves most. They can also be quite spiteful and easily hurt others without thinking of the effects.

Love and Compatibility for November 18 Zodiac

Lovers born on November 18 are passionate, sensual and secretive. They find it very hard to commit to one person, but when they do they become very loyal and reliable. However they keep many things to themselves as they are afraid to appear sensible and weak in front of someone else. They are attracted to someone who shares the same exciting lifestyle as them. You can conquer the heart of Scorpio if you know how to handle them and be open and ready to listen when they have a moment when they feel like sharing what's going on in their mind.

November 18 Zodiac people are most attracted to the other water signs: Cancer and Pisces as they tend to share the same vision of life. In love, Scorpio is permanently seeking for unconditional love and stability and the best to offer them this is the native born under Taurus. The lover in Scorpio is said to be least compatible with Libra. As for the rest of partnerships between the other star signs and Scorpio, you know what they say, stars predispose but people dispose.

Deep red is the color that is considered lucky for those Scorpio natives with November 18.

This hue denotes sensuality and depth coupled with the energy of pure red. This zodiac color should be used for objects that are sitting in places where these natives spend most of their time.

Those with deep red as sign color are tenacious, puzzle solvers, who like to be challenged but don't like change. Wearing deep red is comfortable, puts a barrier towards the outer world and helps conceal emotional insecurities.

The elegant Topaz is the birthstone that is considered lucky for those Scorpio natives with November 18.

Topaz suggests friendship, constancy and altruism. The zodiac birthstone could be used in accessories and jewelry items.

This birthstone is said to be beneficial for blood disorders, respiratory system and insomnia. This is an orange stone with pink undertones that was worn by the Russian Czars.

Another gemstone considered beneficial for Scorpio natives is Garnet. It represents constancy and balance.

The flower considered to be representative for Scorpio natives with November 18 is Chrysanthemum.

This plant is known to symbolize meditation and introspection. This zodiac flower could be used in gifts and accessories.

This is a flower thought to clear negative energies from around it so it can be used as a joyous decoration or even as a lucky charm. This flower is to be found during midsummer to late fall.

The lucky metal for those born under the November 18 is represented by Iron.

Iron is one of those metals that denote strength and purity. This zodiac metal could be used in accessories and decorative objects.

It undoubtedly suggests the strength of the pure Scorpio. Iron also has magnetic properties well studies by the science.

Those born on November 18 can be described as emotional but also detached, confident but also mysterious and refrained. These natives are just as jealous as they are passionate and not one day goes without them having some sort of meddling thoughts in this direction. Their point of view about the financial aspects of life is that they need to indulge themselves and those close as much as possible. Their health is generally good but since Scorpio rules the bladder, genital organs and the associated arteries, they are susceptible to affections concerning the above mentioned regions.

The next poll is made to reveal which do you think is the most successful area in the life of those belonging to November 18:

What’s the luckiest feature of the November 18 Zodiac Sign?

November 18 Zodiac belongs to the third decan of SCORPIO (November 13-November 21). This decan is influenced by the Moon. Those born under this influence combine the mysterious and sensual nature of Scorpio with the emotional and nurturing spirit of the Moon. This period tempers the positive and negative characteristics of the Scorpio zodiac sign with a great accent on the negative ones.

Being born on the 18th day of the month shows compassion, affection, organization and great imagination and cheerfulness. The numerology for November 18 is 9. This number reveals change, progress and innovation. In association with number nine Scorpio people turn out to be innovative and humanitarian idealists.

November is the eleventh month of the year, bringing the opportunity to stock experience and knowledge. Those born in November are determined and attractive. November 18 Zodiac people are active and temperamental. November has as representative symbols the Chrysanthemum as a plant and Citrine and Topaz as gemstones. The name of this month comes from the Latin “novem”.

What statistics say about November 18 Zodiac?

In a year in the Gregorian Calendar, November 18 is the 322nd day or the 323rd day in case of leap years and until the end of the year there are left 43 days. The seventy ninth day of autumn, this is also the National Day in Oman.

Scorpio is situated first place in terms of popularity as a birth sign on the list of most met to least met zodiac signs. Exuding negative polarity and a sensual energy, this is an even numbered sign with a feminine symbolism. This is suggestive for introvert natives who are inward-looking and confident only in own capabilities. The Sorcerer is an archetype often used when describing this sign. Scorpio people are amongst the high achievers both in academics and sports.

Does the information on November 18 zodiac describe you?