As a Scorpio born on November 20th, you boast originality and an eye for detail. You are very much interested in material possessions, however, your strong life principles will always prevent you from putting these ahead of your family or those dear.

Influenced by the achievements of others, you may be chasing some goals that are not necessarily yours at some points in life. Prepare to read an exceptional report in the following rows.

Astrological symbol: Scorpion. The sign of the Scorpio is influential for those born October 23 - November 21, when the Sun is considered to be in Scorpio. It is suggestive for numerous desires, tenacity and power and brains combined.

The Scorpio Constellation, one of the 12 constellations of the zodiac is placed between Libra to the West and Sagittarius to the East and its visible latitudes are +40° to -90°. The brightest star is Antares while the whole formation is spread on 497 sq degrees.

The name Scorpio comes from the Latin name for Scorpion and so is called in Greece and France, while in Spain the sign for November 20 zodiac sign is called Escorpion.

Opposite sign: Taurus. This suggests help and nicety but also means that this sign and Scorpio can create an opposition aspect at some point, not to mention that opposites attract.

Modality: Fixed. This can reveal how much originality and loyalty exists in the lives of those born on November 20 and how expansive they are in general.

Ruling house: The eighth house. This connection suggests that Scorpios rule over material possessions of others around, sexual relations and the ultimate transformation of death. This house focuses on what others own and on the need to have everything that others have.

Ruling body: Pluto. This celestial body is said to influence achievement and seriousness. It is also relevant from the caution perspective. The Pluto glyph represents a circle over a crescent and a cross.

Element: Water. This element makes things boil in association with fire, it's evaporated by air and shapes things in combination with earth. Water signs born under November 20 are malleable, versatile and full of creativity.

Lucky day: Tuesday. This is a day ruled by Mars, therefore deals with motivation and ardor. It suggests the intellectual nature of Scorpio natives.

More info on November 20 Zodiac below ▼ 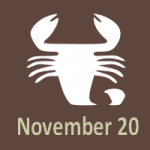 People born on November 20 are helpful and empathetic beings, sometimes dreamy, sometimes overly rational. They have great emotional intelligence skills and often share their awareness with those close to them despite the otherwise secretive image that they surround themselves with. They feel the need to be in charge and dislike commonness but their biggest obstacle is when they are confronted with sudden transformation. They enjoy journeying very much, especially the discovery side of it.

Positive traits: Private, charming and intelligent, these natives possess complex personalities that need time to unravel. They are inquisitive by nature and love discovering new things. They are very private when it comes to their activities but are also boastful when in the right company as they can be quite uninhibited when in the right company. They are loyal to those they care for and are usually respectable members of the society.

Negative traits: Suspicious and resentful beings by nature, these natives find it hard to cope with the frustration they accumulate in their lives. They also find it easier to blame others and then they act accordingly. They don't ever admit when they are wrong. They are possessive and tend to go all controlling with those close to them and often play the victim and find all kinds of weird explanations for their clinginess when confronted.

Love and Compatibility for November 20 Zodiac

Lovers born on November 20 are passionate and mysterious. They find it very hard to commit to one person, but when they do they become very loyal and reliable. Although they don't usually show it, they are very sensible and easily offended and should be handled with great care. They are attracted to persons who know how to combine praise with constructive criticism. You can conquer the heart of Scorpio if you are always there listening when they feel the need to open their hearts.

November 20 Zodiac people are very attached to the other two water signs: Cancer and Pisces as they tend to share the same vision of life. In life, Scorpio is in a constant search for a protective and dependable partner and the one to offer them this is the native in Taurus. The lover in Scorpio is thought to be least compatible with Libra. As for the rest of compatibilities between the other star signs and Scorpio, you know what they say, stars predispose but people dispose.

The color considered to be representative for Scorpio natives with November 20 is deep red.

This hue denotes sensuality and depth coupled with the energy of pure red. This zodiac color should be used in objects that surround the natives.

People who have deep red as sign color are sophisticated, methodical and have a mysterious yet calming presence. Some people use this color as a comfort and relief color but also because it is a traditional color.

Other colors for Scorpio people are purple, scarlet and carmine.

The gracious Topaz is the birthstone defined for November 20 and in general for Scorpio natives.

Topaz is a precious material that denotes strength and constancy. This zodiac birthstone could be used in accessories and bracelets.

This birthstone is said to be beneficial for blood disorders, respiratory system and insomnia. Did you know that the most valuable shade of topaz is called Imperial topaz?

The lucky flower for those born under the November 20 is represented by Chrysanthemum.

This plant is known to symbolize meditation and introspection. This zodiac flower should be used in decorative items in the places these natives spend time.

This is a flower thought to clear negative energies from around it so it can be used as a joyous decoration or even as a lucky charm. This flower can be enjoyed during midsummer to late fall.

Other plants that suit Scorpio natives are Poppies and Lavender.

The metal considered to be representative for Scorpio natives with November 20 is Iron.

Iron is known to represent strength and aggression. This zodiac metal should be used in all kinds of jewelry items that are to be worn frequently.

Iron usage promotes action and confidence. Left in moist air, Iron rusts which suggests that it should be handled with care exactly like the Scorpio native.

As a personality, those born on November 20 are sensitive to even the slightest mistake but also invest a lot in their own development and in helping those who captivate their interest. Love is an all consuming passion for these natives so there is no wonder that they find themselves enticed by all kinds of games. They make great analysts and even detectives due to their inquisitive nature and how they love to unveil things. Speaking about health, they might be in tune with their feelings but don't always recognize a real pain, so they might have trouble asking for help at the right time.

What do you think is the luckiest thing people belonging to November 20 were offered by mother nature? Answer this poll and see how many people think like you:

What’s the luckiest feature of the November 20 Zodiac Sign?

November 20 Zodiac belongs to the third decan of SCORPIO (November 13-November 21). This decan is strongly influenced by the Moon. This is representative for people who are determined and mysterious just like Scorpio and emotional and changing just like the Moon. This period tempers the positive and negative characteristics of the Scorpio zodiac sign, slightly enhancing the negative ones.

Being born on the 20th day of the month shows a person who is patient, task oriented but also imaginative and emotional. The numerology for November 20 is 2. This number reveals balance and partnerships. It is the representative number for the desire of harmony and peace. Those Scorpio associated with this numerology can become great mediators and with age they will only turn wiser, gentler and incredibly more considerate to other people.

November is the last autumn month in the Northern Hemisphere, bringing a quick fall down of temperatures everywhere. Those born in November are brilliant and determined. November 20 Zodiac people are generous and brave. The symbols for November include the Citrine and Topaz as gemstones and Chrysanthemum as a plant. The name of this month comes from the Latin “novem”.

What statistics say about November 20 Zodiac?

November 20 is counted in the Gregorian Calendar as the 324th day of the year or the 325th day in leap years, while until the end of the year there are 41 days left. The eighty first day of autumn, this is also the Universal Children's Day and Africa Industrialization Day as recognized by the United Nations.

Scorpio as occurrence in birth signs is considered to be the first most popular. Being an even number sign, this is also considered a feminine sign with a negative polarity and a sensual energy. This defines introvert natives who are discreet and quite rigorous. One of the archetypes used to characterize this sign is the Psychiatrist. Those born in autumn, under Scorpio are quick learners but they also make great sportsmen.

Does the information on November 20 zodiac describe you?