Being a Scorpio born on November 3rd, your personality is complex and has numerous facets. You enjoy being a model for those around but also have your own, very personal, moments of doubt and weakness.

You will change a lot in late adulthood, compared to how you were as a young person and will not regret time passing. Prepare to read an outstanding profile analysis in the following rows.

Astrological symbol: Scorpio. The sign of the Scorpio is influential for those born October 23 - November 21, when the Sun is considered to be in Scorpio. It is suggestive for willfulness, plenty of desire and resilience.

The Scorpio Constellation lies between Libra to the West and Sagittarius to the East on an area of 497 sq degrees and has Antares as its brightest star. Its visible latitudes are between +40° to -90°, this being one of the zodiac's twelve constellations.

The name Scorpio is the Latin name for Scorpion. In Spanish, Escorpion is the name of the sign for November 3 zodiac sign. In Greek and French it is used Scorpion.

Opposite sign: Taurus. This suggests depth and punctuality but also means that this sign and Scorpio can create an opposition aspect at some point, not to mention that opposites attract.

Modality: Fixed. This modality shows the affectionate nature of those born on November 3 and their shyness and warm heart regarding most life situations.

Ruling house: The eighth house. This house rules over the material possessions of others, and directs towards the struggle of an individual to own whatever those around own. It also refers to mystery and the ultimate unknown that is death.

Ruling body: Pluto. This planet reflects stamina and wits. It also suggests the resourcefulness component. Pluto is equivalent to Hades, the Greek god of the underworld.

Element: Water. This is the element unraveling the complexity and depth in the lives of people born under the November 3 zodiac sign. Water is said to combine differently with the other three elements, for instance, with earth it helps model things.

Lucky day: Tuesday. This is a day ruled by Mars, therefore symbolizes power and eagerness and identifies best with the Scorpio natives who are secretive.

More info on November 3 Zodiac below ▼ 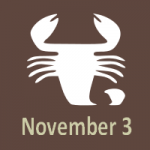 People born on November 3 are very convivial and often helpful and empathetic when they feel the need to do something for those around them. Beside this great sense of social awareness they are also passionate beings and try to live life as worry free as possible. Most of them have a secret vision and try to build up around it, although they don't often get it right because they are surrounded by commonness that they dislike and are always engulfed in battling battle with it and somewhat displacing their objectives.

Positive traits: Persuasive and great organizers, these natives are people of words with entangled behavior and mysterious ways of social activity. Scorpio people are usually full of curiosity and those born this day make no exception. They want to know what is going on everywhere. Many of their surprising enterprises show how bold they can be when they have the right reason. Those born under this sign are also passionate and charming.

Negative traits: Fickle and hard to handle even when they are at their best, these natives are quite devious and might play more than one card at once. They are bull headed and jealous and often get all supervising even over the lives of those close to them and often find the weirdest explanations for their clingy behavior. They find it hard to recognize their own faults but they are very rapid to judge others.

Love and Compatibility for November 3 Zodiac

Lovers born on November 3 are passionate, sensual and secretive. They find it very hard to commit to one person, but when they do they become very loyal and reliable. However they keep many things to themselves as they are afraid to appear sensible and weak in front of someone else. They are attracted to someone who shares the same exciting lifestyle as them. You can conquer the heart of Scorpio if you know how to handle them and be open and ready to listen when they have a moment when they feel like sharing what's going on in their mind.

November 3 Zodiac people are most attracted to the other water signs: Cancer and Pisces as they tend to share the same vision of life. In love, Scorpio is permanently seeking for unconditional love and stability and the best to offer them this is the native born under Taurus. The lover in Scorpio is said to be least compatible with Libra. As for the rest of partnerships between the other star signs and Scorpio, you know what they say, stars predispose but people dispose.

Deep red is the representative color for those born under the November 3.

Deep red emanates action and drives everyone's attention. This zodiac color should be used in objects that surround the natives.

People who have deep red as sign color are sophisticated, methodical and have a mysterious yet calming presence. Wearing deep red is comfortable, puts a barrier towards the outer world and helps conceal emotional insecurities.

Other colors for Scorpio people are purple, scarlet and carmine.

The birthstone for Scorpios born with the November 3 is the impressive Topaz.

Topaz symbolizes friendship and altruism. This zodiac birthstone should be used in all kinds of jewelry items that are to be worn frequently.

This gemstone releases positive and balancing vibes towards emotions and also protects against negative thought. This gemstone comes in yellow and golden shades.

The flower considered to be representative for Scorpio natives with November 3 is Chrysanthemum.

Chrysanthemum is a plant that symbolizes meditation and the warmth of sun. This zodiac flower should be used in decorative items in the places these natives spend time.

This is a flower thought to clear negative energies from around it so it can be used as a lucky charm or joyous decoration This flower can be found during midsummer to late fall.

The lucky metal for those born under the November 3 is Iron.

Iron is a metal that suggests strength and action. This zodiac metal should be used in bracelets and other accessories.

This strong metal suggests the force of fiery Scorpio who is easily stimulated just like Iron can be magnetized. Left in moist air, Iron rusts which suggests that it should be handled with care exactly like the Scorpio native.

Those born on November 3 are great at observing events and even the people around. They sure take their own time to analyze a lot of matters in love but often they are more tempted into passion so they do have their moments when they jump head first. They make great psychologists, investigators and analysts due to their inquisitive nature and how they love to unveil things. Their health is quite strong but since Scorpio is said to rule the bladder, genital organs and corresponding circulatory system, they are prone to suffer from ailments of these regions.

Which do you believe is most influential for those belonging to November 3? By answering this poll you can share your opinion:

What’s the luckiest feature of the November 3 Zodiac Sign?

November 3 Zodiac belongs to the second decan of SCORPIO (November 3-November 12). This decan is strongly influenced by the planet Neptune. This is representative for people who are determined and sensual just like Scorpio and lucky and eager learners just like Neptune. This period is said to temper the characteristics of the Scorpio zodiac sign.

Being born on the 3rd day of the month suggests these people are lively, imaginative and very sociable. The numerology for November 3 is 3. This number reveals great human interactions and all kinds of communication. People ruled by number three sure know their way around words. The association between Scorpio and this number will surface eloquence and great people skills in the first.

November is the eleventh month of the year, bringing the opportunity to stock experience and knowledge. Those born in November are determined and attractive. November 3 Zodiac people are active and temperamental. November has as representative symbols the Chrysanthemum as a plant and Citrine and Topaz as gemstones. The name of this month comes from the Latin “novem”.

What statistics say about November 3 Zodiac?

In the Gregorian Calendar, November 3 is the 307th day of the year or the 308th day in leap years, while until the end of the year there are 58 days left. The sixty fourth day of autumn, this is also the Culture Day in Japan.

Scorpio is placed first in order of occurrence on the list of most common to least common zodiac signs. It is of feminine symbolism, considered of even number and with a negative polarity. This is highly representative for introvert people who are inward-looking and self-reliant. The archetype used to characterize this sign is the Chemist. Scorpio people are amongst the high achievers both in academics and sports.

Does the information on November 3 zodiac describe you?