Being a Scorpio born on November 7th, you seem to find your comfort when being in a partnership, whether at work or in your personal life. Most of the time you will be very productive but there will also be moments in which you will allow yourself to dream and get distracted.

You are going to be very sentimental at times too. Prepare to read a detailed profile analysis in the following rows.

Astrological symbol: Scorpion. The sign of the Scorpio is influential for those born October 23 - November 21, when the Sun is considered to be in Scorpio. It is suggestive for the empowering and passionate nature of these natives.

The Scorpius Constellation is one of the twelve constellations of the zodiac and lies between Libra to the West and Sagittarius to the East. The brightest star is called Antares. This constellation is quite small spread on an area of only 497 square degrees and covering visible latitudes between +40° and -90°.

Opposite sign: Taurus. Partnerships between the Scorpio and Taurus sun signs are considered auspicious and the opposite sign reflects upon the surrounding mystery and productivity.

Modality: Fixed. This presents friendliness and determination and also how humorous natives born on November 7 genuinely are.

Ruling house: The eighth house. This house governs material possessions of others, the unknown and death. This explains the full of mystery, complex but troubled nature of Scorpio and the desire to have whatever others are having.

Ruling body: Pluto. This connection seems to suggest power and sentimentalism. Pluto is in charge with the spiritual discerning between truth and lies. This also shows a focus on simplicity.

Element: Water. This element symbolizes growth and is considered to rule over emotions turning people associated with November 7 to base their actions more on their feelings and less on reason. Water also gets new meanings in association with fire, making things boil, with air that evaporates it or with earth that shapes things.

Lucky day: Tuesday. This is a day ruled by Mars, therefore deals with alertness and accuracy. It suggests the extreme nature of Scorpio natives.

More info on November 7 Zodiac below ▼ 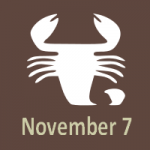 People born on November 7 can be defined as intense and attractive. They seem to only sweep others of their feet because they always remain cold, composed and focused. Just like a true Scorpio they are thoughtful and caring, but only to the people who have awakened their interest. They enjoy travelling and all situations when they can feel in charge. They hate being taunted and being confronted with any type of sudden change. The best environment for those born under this sign combines the two big pleasures of Scorpio, mystery and travel.

Positive traits: These natives are courageous and have enticing resources that they use whenever they need to gather a rapid response. They are inquisitive by nature and seem to know everything that is happening in the areas they have an interest in. They are a funny company when you catch them in a good temper. They make jovial mates and can prove to be very captivating when let to display themselves.

Negative traits: Spiteful beings, these natives are capable of rapidly hurting others, whether they do it on purpose or not. They are possessive and extremely controlling, even when they have no reasons to and not only with their partners but also with other people around them. They are moody and subjective and the more scrutiny they require from others the less they invest themselves. They are spiteful and aren't capable of recognizing their own mistakes.

Love and Compatibility for November 7 Zodiac

Lovers born on November 7 are passionate and secretive. They enjoy dating rituals and keeping an aura of mystery on their lives. They hardly connect with someone at a deeper level but when they do, they open their minds completely. They are attracted to sensual partners who know how to handle them and know how to combine praising with criticism. You can conquer the heart of Scorpio if you dedicate your life to understanding their complex parade of emotions and also to supporting their impulsive decisions.

November 7 Zodiac people are most attached to the other two water signs: Cancer and Pisces as they tend to share the same vision of life. In love, Scorpio is in a constant search for stability and protection and the best to offer them this is the native in Taurus. The least compatible with people born on November 7 are those born under Libra. As for the rest of compatibilities between the other star signs and Scorpio, you know what they say, stars predispose but people dispose.

The color used in astrology for those with November 7 is deep red.

Deep red emanates action and drives everyone's attention. This zodiac color should be used in objects around the house and accessories.

People having deep red as sign color are known to keep their decisions and their word for as long as possible. Wearing deep red is comfortable, puts a barrier towards the outer world and helps conceal emotional insecurities.

The distinguished Topaz is the birthstone of preference for Scorpios, especially those born under the November 7.

Topaz is a precious material that denotes strength and constancy. This zodiac birthstone is advised to be used in pendants and earrings.

This birthstone is thought to reveal new ways of interaction with the outside world and also enhance innate characteristics of an individual. This is an orange stone with pink undertones that was worn by the Russian Czars.

Another gemstone considered influential for Scorpio natives is Garnet. It suggests understanding and balance .

Chrysanthemum is the flower said to be representative for Scorpio people born with November 7.

Chrysanthemum is a known symbol of meditation, introspection and warmth. The zodiac flower could be used in gifts and decorative items.

This is a flower thought to clear negative energies from around it so it can be used as a lucky charm or joyous decoration This flower is to be found during midsummer to late fall.

Other plants that suit Scorpio natives are Poppies and Lavender.

The metal used in astrology for those with November 7 is Iron.

Iron symbolizes aggression and action. This zodiac metal should be used in bracelets and other accessories.

Iron is an ancient metal of work and war. Iron also has magnetic properties well used by science.

In general, those born on November 7 are mysterious and charming and prefer to steer clear of obligations. When it comes to love and family, these natives have a profound way of feeling love and their sensations often go beyond the believable. They make great analysts, investigators and social workers because of their inquisitive nature and how they love to unveil things. When it comes to health they are prone to infections and diseases of the reproductive organs.

What do you believe is the luckiest thing people belonging to November 7 were being granted by mother nature? Share your point of view by answering the following poll:

What’s the luckiest feature of the November 7 Zodiac Sign?

November 7 Zodiac belongs to the second decan of SCORPIO (November 3-November 12). This decan is under the supervision of the planet Neptune. Those born in this period are sensual and mysterious just like a true Scorpio and ready to seize all opportunities just as Neptune makes them be. This period tempers the positive and negative characteristics of the Scorpio zodiac sign with a great accent on the positive ones.

Being born on the 7th day of the month suggests a perfectionist who is good with reasoning and is also very persistent. The numerology for November 7 is 7. This number reveals thoughtfulness, consciousness and high spiritual values. In association with number seven, Scorpio becomes reliable, trustworthy and shows great moral values.

November is the eleventh month of the year, bringing the opportunity to stock experience and knowledge. Those born in November are brilliant and attractive. November 7 Zodiac people are dynamic and stubborn. November symbols that resonate with these people are Citrine and Topaz as gemstones and the Chrysanthemum as a plant. The name of this month comes from the Latin “novem”.

What statistics say about November 7 Zodiac?

November 7 is counted in the Gregorian Calendar as the 311th day of the year or the 312th day in leap years, while until the end of the year there are 54 days left. The sixty eighth day of autumn, this is also the Commemoration Day in Tunisia.

Scorpio is placed on the first position on the list of birth signs occurrence. Negative polarity and volcanic energy, this is an even numbered sign with a predominantly feminine symbolism. This exemplifies introvert natives who are thoughtful and uncompromising. The Mystic is an archetype used when referring to this sign. People born in autumn are said to make great athletes.

Does the information on November 7 zodiac describe you?