As a Libra born on October 1st, you are very gentle and caring with those around you and try to motivate them to achieve their best. You are charming and composed most times but you also have moments in which you allow your emotions to get the better of you.

As you grow old, you will find clever solutions to important problems. Prepare to read a special horoscope profile below.

Astrological symbol: Scales. The sign of the Scales is influential for those born September 23 - October 21, when the Sun is considered to be in Libra. It is suggestive for knowledge, balance and justice.

The Libra Constellation is one of the twelve constellations of the zodiac, covering visible latitudes between +65° and -90°. It lies between Virgo to the West and Scorpio to the East on an area of only 538 square degrees. It has no first magnitude stars.

The name Libra comes from the Latin name for Scales, in Greek the sign for October 1 zodiac sign is called Zichos, while in Spanish and French they also call it Libra.

Opposite sign: Aries. This sign as the opposite or complementary of Libra reveals elegance and a daring state and shows how these two sun signs have similar goals in life but they reach to them differently.

Modality: Cardinal. This offers an insight in the structured nature of those born on October 1 and their cleanness and punctuality in life in general.

Ruling house: The seventh house. This placement suggests a space of partnership, altruism and balance achieved through cooperation. This is suggestive for the interests of Libras and for their behavior in life.

Element: Air. This element symbolizes evolution and innovation and is considered to rule over the clever and open minded individuals born under the October 1 zodiac sign. Air also gets new meanings in association with fire, making things heat up, vaporizing water while earth seems to smother it.

Lucky day: Wednesday. This is a day ruled by Mercury, therefore deals with harmony and evaluation. It suggests the changeable nature of Libra natives.

More info on October 1 Zodiac below ▼ 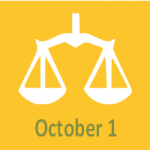 People born on October 1 benefit from being neutral, elegant and great communicators. Just like a true Libra, they are considerate and loving. When they are not out there trying to save the world they turn into very introspective beings and enjoy meditation and relaxation techniques. They dislike shallow people and not being listened to. Those born under this sign enjoy situations where have the chance to guide and offer moral support.

Positive traits: These natives have a domestic nature in them that craves for peace and balance and also a powerful sense of justice. Therefore they seem to do what is expected of them all the time, first work than relaxation and seem to attain this way a satisfying sense of accomplishment with their lives. They are innovative and charming but they often let others follow their ideas because they are too cautious to take big leaps.

Negative traits: Anxious and over thinking at times, these natives need to learn to stop worrying so much and stop making all kinds of scenarios. They want to be prepared but they often just end up being more stressed then necessary. They have this fame of being helpful but they can also be quite resentful and intolerant, especially with those people from whom they are not feeling they receive enough credit.

Love and Compatibility for October 1 Zodiac

Lovers born on October 1 are romantic and loyal. They are attracted to enthusiastic and imaginative people that are as reliable as they are. You can conquer the heart of Libra if you are as trustworthy and affectionate as they are. This single native is completely focusing energy on their personal development and is in no way in a hurry to enter a relationship if they don't feel it's the right thing to do.

October 1 Zodiac people are very attached to the other two air signs: Gemini and Aquarius as they tend to share the same vision of life. In life, Libra is in a constant search for an active and visionary partner to expand their horizon and the one to offer them this is the native in Aquarius. The lover in Libra is thought to be least compatible with Aries. As for the rest of compatibilities between the other star signs and Libra, you know what they say, stars predispose but people dispose.

The color considered to be representative for Libra natives with October 1 is blue.

This hue denotes harmony, symmetry and aesthetics, just like Libra. This zodiac color is advised to be used in accessories and items of clothing.

People with blue as sign color tend to sometimes use their emotions when faced with important decisions, however they rarely get overwhelmed and let emotions completely take over. People who prefer darker shades are moodier and more likely to be picky and emotionally insecure.

Other hues for Libra natives are pink and green.

The versatile Opal is the birthstone defined for October 1 and in general for Libras.

This is a precious stone that symbolizes clarity and honesty. This zodiac birthstone should be used in pendants, bracelets and other accessories.

It is thought to unleash the creative genius as Opal suggests a hopeful and visionary nature. Did you know that Opal is the official gemstone of Australia?

Another gemstone considered lucky for Libra natives is Jade. It is the symbol of practical wisdom.

Rose is the flower that is considered lucky for those Libra natives with October 1.

Rose is a plant that symbolizes loyalty and trust. This zodiac flower should be used in decorations and other accessories.

Other flowers for Libra people are the flowers of all fruit trees.

The metal considered to be representative for Libra natives with October 1 is Bronze.

Bronze is known to represent wisdom and never ending power. The zodiac metal could be used in accessories and jewelry items.

Those born on October 1 can be described as dreamy, helpful and entertaining but these natives are also very practical and reliable. Their vision regarding their love and family life comprises of a lot of emotion, harmony and a sense of friendship with their significant other. When it comes to the financial aspects of life, they prefer not to handle money directly but they do want to have it so they chase it everywhere. In health, they need to take proper precautions in relationships in order to avoid any transmittable diseases and also monitor their water intake better as their kidneys are their sensible organs.

What do you believe is the gift people belonging to October 1 were given by mother nature? This is a poll on this issue that you are invited to answer:

What’s the luckiest feature of the October 1 Zodiac Sign?

October 1 Zodiac belongs to the first decan of LIBRA (September 23-October 2). This decan is influenced by the planet Venus. Those born under this influence combine the affectionate and understanding nature of Libra with the passion and sensuality of Venus. This decan is known to magnify all the positive and negative characteristics of the Libra zodiac sign.

Being born on the 1st day of the month shows a lot of independence, loyalty and energy. The numerology for October 1 is 1. This number reveals revels leadership qualities, great will power and an original approach to life, all wrapped in a charming personality. Those Libra can only be proud of this association as this is the number of achievers, of those who see the bigger picture and are set to follow their goals no matter what.

October is the tenth month of the year, bringing radiant activity and provision like activities. Those born in October are attentive and decisive. October 1 Zodiac people are introspective daydreamers. October symbols that resonate with these people are the Aquamarine and Opal as gemstones and the Calendula as plant. The name of this month comes from the Latin “octo”.

What statistics say about October 1 Zodiac?

In the Gregorian Calendar, October 1 is the 274th day of the year or the 275th day in leap years, while until the end of the year there are 91 days left. The thirty first day of autumn, this is also the World Vegetarian Day and the International Day of Older Persons as recognized by the UN.

Libra is situated fifth place in terms of popularity as a birth sign on the list of most met to least met zodiac signs. A sign of positive meaning with harmonious energy, this exudes masculine energy and is considered an odd numbered sign. This exemplifies extrovert people who are affable and enthusiastic. The archetype used to characterize this sign is the Flirt. The Libra natives are rated as great achievers in school and at sport competitions.

Does the information on October 1 zodiac describe you?