Being a Libra born on October 12th, you are always in search of new adventures, although, at the end of the day, you prefer returning to your comfortable place. You are witty and charming and will use your intuition to help others, perhaps even when your help is not necessarily asked for.

Your desires in young years will drive you to experience a lot of situations. Prepare to read a comprehensive horoscope profile below.

Astrological symbol: Scales. The sign of the Scales is influential for those born September 23 - October 21, when the Sun is considered to be in Libra. It is suggestive for the balanced and tactful nature of these natives.

The Libra Constellation is one of the twelve constellations of the zodiac, covering visible latitudes between +65° and -90°. It lies between Virgo to the West and Scorpio to the East on an area of only 538 square degrees. It has no first magnitude stars.

The name Libra comes from the Latin name for Scales and so is called in Spain and France, while in Greece the sign for October 12 zodiac sign is called Zichos.

Opposite sign: Aries. This means that this sign and Libra sun sign are in a complementary relation, suggesting pleasure and affection and what one has the other lacks and the other way around.

Modality: Cardinal. The quality shows the determined nature of those born on October 12 and their lust and positivity regarding most life aspects.

Ruling house: The seventh house. This is the space of close partnership, the exact opposite of the egotistic house one of self. Whether it refers to a spouse or a business partnership this is the turning point in the Libra's life quest. Libras seem to find their balance when the good of this particular relation is accomplished.

Ruling body: Venus. This planetary ruler symbolizes sympathy and organization and also reflects on responsibility. The Venus glyph is composed by the circle of spirit and the cross of matter.

Element: Air. This is the element of those who prioritize and organize their lives while linking everything together. Is said to influence those born on October 12 and governs their relationship with the other elements, for instance in association with fire, it heats the situation up.

Lucky day: Wednesday. Libra best identifies with the flow of the ambitious Wednesday while this is doubled by the connection between Wednesday and its ruling by Mercury.

More info on October 12 Zodiac below ▼ 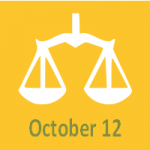 People born on October 12 can be defined as graceful, balanced and very good with words. They are also the most unfailing team members. Just like a true Libra they are empathetic and tranquil at heart. They enjoy the chances to support others and to indulge with sweets from time to time. They hate having to deal with superficial people and sudden transformation. The best setting for those born under this sign is somewhere peaceful and away with their significant other.

Positive traits: These natives are circumspect, attentive to every detail and seem to have this organized way of living their lives. They are extremely efficient and accommodating and often their surprise those around them with their resistance. They are positive most times and although in words they might seem utopian, they have their feet grounded and prefer cohesion and security to risk and fame.

Negative traits: Born perfectionists and sometimes intolerant and fastidious, these natives need to be careful not to fall in any of the extremes, to either damage their self esteem when they feel others are better than them or to become vain and sarcastic from dealing with people they consider inferior. They also need to understand that worrying can only make things worse and that they should often have a grain of faith that everything will sort out in the end.

Love and Compatibility for October 12 Zodiac

Lovers born on October 12 are romantic and affectionate. They seek for a lifetime partner to whom they can commit and create a balanced and accomplishing relationship. They are attracted to enthusiastic and imaginative people that are as reliable as they are. You can conquer the heart of Libra if you are trustworthy and energetic. When they are single they are in no hurry to enter a relationship if they don't feel it's the right thing to do, they focus instead on their own self development.

October 12 Zodiac people seem to be most attracted to the other air signs: Gemini and Aquarius as they tend to share the same vision of life. In love, Libra is in a permanent search for someone who can understand their adventurous and visionary nature and the most suitable to offer them this is the native born under Aquarius. The lover in Libra is said to be least compatible with Aries. As for the rest of partnerships between the other star signs and Libra, you know what they say, stars predispose but people dispose.

Blue is the color for Libra zodiac.

Whether it is the calm and cold pale blue or the energizing and strong dark blue, this is the hue that best resonates with the equilibrium in the live of the native in Libra. The power color can be used in things around, from clothes, decorations to even the color of your vehicle.

Other colors that are good for people born on October 12 are pink and green.

The sign stone for Libra zodiac is the versatile and strong Opal.

This birthstone is thought to bring creativity and a certain visionary attitude to the wearer. No matter how grounded and unimaginative that person is. Opal also symbolizes hope and truthfulness.

Other sign stones that are considered to influence people born on October 12 are Peridot and Jade.

Rose is the flower of choice for Libra zodiac.

Rose symbolizes passion and unconditional love but one of the main symbols is loyalty and purity of thought. Depending on the color they are, roses can embrace many other meanings.

Other flowers considered to bring luck to people born on October 12 are Poppy and Lavender.

Bronze is the metal of choice for Libra zodiac.

Bronze symbolizes hard earned wealth and wisdom. It relates to monetary wealth, artistic creations and warfare. It is thought to influence progress and civilization.

Another metal considered lucky for Libra is Copper.

Those born on October 12 are charming and avoid conflict and violence. They are flexible and understanding but all to a point. They are incorrigible romantics who always seem to be in love or accompanied by someone supportive but they also offer all they have to give. Quite lazy when they are not entirely sold by something, these natives need a lot of convincing and quick result before they invest themselves into something. In health, they need to take proper precautions in relationships in order to avoid any transmittable diseases and also monitor their water intake better as their kidneys are their sensible organs.

Which of the four do you think people belonging to October 12 have the most? Share your point of view by answering the following poll:

What’s the luckiest feature of the October 12 Zodiac Sign?

October 12 Zodiac belongs to the second decan of LIBRA (October 3-October 13). This decan is strongly influenced by the planet Uranus. This is representative for people who are affectionate and understanding just like Libra and curious and enthusiastic just like Uranus. This period is said to temper the characteristics of the Libra zodiac sign.

Being born on the 12th day of the month shows energy, friendliness, affection but also logic and realism. The numerology for October 12 is 3. This number reveals great human interactions and all kinds of communication. People ruled by number three sure know their way around words. The association between Libra and this number will surface eloquence and great people skills in the first.

October is the tenth month of the year, bringing the opportunity for provision like activities. Those born in October are attentive and modest. October 12 Zodiac people are opinionated but loyal. October has as representative symbols the Calendula as plant and the Aquamarine and Opal as gemstones. The name of this month comes from the Latin “octo”.

What statistics say about October 12 Zodiac?

October 12 is counted in the Gregorian Calendar as the 285th day of the year or the 286th day in leap years, while until the end of the year there are 80 days left. The forty second day of autumn, this is also the Freethought Day in the United States.

Libra is said to be the fifth zodiac sign on the list of most commonly met to least common signs in the horoscope. Under a definite masculine symbolism, this odd number sign is considered to have a positive meaning with harmonious energy. This is defining for extrovert people who are pleasant and forthcoming. An archetype often used to characterize this sign is the Minx. This is also known as the sign with the highest chances towards a happy marriage.

Does the information on October 12 zodiac describe you?