As a Libra born on October 13th, you are attentive and calculated but will also let your emotions rule past your mind at times. Comfortable with your life choices, you don't put too much resistance to change but can be rather intolerant when people decide things in your name.

The older you get, the more grounded you will become in your own ideas and life principles. Get ready for a special astrological perspective below.

Astrological symbol: Scales. This relates to a tactful individual with a meaningful and moral insight of life. This is the symbol for people born between September 23 and October 22 when the Sun is considered to be in Libra.

The Libra Constellation with visible latitudes between +65° to -90° and has no first magnitude stars, is one of the twelve zodiac constellations. It is spread on an area of 538 sq degrees between Virgo to the West and Scorpio to the East.

The name Libra is the Latin name for Scales. In Greek, Zichos is the name of the sign for October 13 zodiac sign. In Spanish and it is used Libra while in French Balance.

Opposite sign: Aries. This suggests support and cleanness but also means that this sign and Libra can create an opposition aspect at some point, not to mention that opposites attract.

Modality: Cardinal. This presents how much temper and perceptiveness exists in the lives of those born on October 13 and how hard working they are in general.

Ruling house: The seventh house. This house rules over balance achieved through cooperation and partnership and suggests why these carry such an important role in the lives of Libras.

Ruling body: Venus. This celestial body is said to influence sexuality and impulsiveness. It is also relevant from the nicety perspective. Venus is said to inspire the arts and artists.

Element: Air. This is the element suggesting the balance in the lives of those born on October 13 but also the way they connect to everything that is happening around them.

Lucky day: Wednesday. This is a day ruled by Mercury, therefore deals with clarity and reason. It suggests the helpful nature of Libra natives.

More info on October 13 Zodiac below ▼ 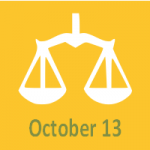 People born on October 13 are attentive, caring and have a tranquil nature. They are very aware and prefer to care for others, even sometimes putting themselves second place. They are altruistic and only rarely indulge in something they like, for instance sweets at times. They avoid having to deal with commonness and interacting with boastful people. They can be quite isolated at times and prefer to stay in peaceful places.

Positive traits: These natives have a progressive nature and are often more focused than anyone else. They are practical beings but also posses an out of the ordinary efficiency as they can stay put with a task for a lot of time. While they are innovative and might have some great ideas in their minds, they prefer to tackle small goals and their biggest motivation is providing for their families.

Negative traits: Subjective, fastidious and even boastful at times, they can surprise those around them by turning into spoilt children when they feel those around them don't appreciate them as much as they would want them to. They are shallow and take things easily when they are not the ones to come up with the all kinds of plans and they often play mistrustful and need a lot of persuasive. They also need to worry less because this is stressing them for no reason.

Love and Compatibility for October 13 Zodiac

Lovers born on October 13 are romantic and loyal. They are attracted to enthusiastic and imaginative people that are as reliable as they are. You can conquer the heart of Libra if you are as trustworthy and affectionate as they are. This single native is completely focusing energy on their personal development and is in no way in a hurry to enter a relationship if they don't feel it's the right thing to do.

October 13 Zodiac people are most attached to the other two air signs: Gemini and Aquarius as they tend to share the same vision of life. In love, Libra is in a constant search for a curious and creative partner who can bring some action in their lives and the best to offer them this is the native in Aquarius. The least compatible with people born on October 13 are those born under Aries. As for the rest of compatibilities between the other star signs and Libra, you know what they say, stars predispose but people dispose.

Blue is the color said to be representative for Libra people born with October 13.

Blue as a hue, is the symbol of balance, peacefulness and soothing. This zodiac color should be used for objects that are sitting in places where these natives spend most of their time.

People having blue as sign color prefer to keep to themselves and while it is very hard to gain their trust, once this is done, they are the most dependable and compassionate people. People who prefer darker shades are moodier and more likely to be picky and emotionally insecure.

Other colors indicated for Libra are pink and green.

The attractive Opal is the birthstone of preference for Libras, especially those born under the October 13.

Opal is a precious material that denotes purity and sincerity. This zodiac birthstone could be used in accessories and bracelets.

It is thought to unleash the creative genius as Opal suggests a hopeful and visionary nature. Did you know that Opal is the official gemstone of Australia? Its name derives from the Greek "opallos" which translates into "to change color".

Rose is the flower said to be representative for Libra people born with October 13.

Rose is a known symbol of romance and loyalty. This zodiac flower should be used in decorative items in the places these natives spend time.

Bronze is the metal said to be representative for Libra people born with October 13.

Bronze is a metal that suggests wisdom and never ending power. This zodiac metal should be used in all kinds of jewelry items that are to be worn frequently.

Those born on October 13 are diplomatic and cooperative. They are great planners and even greater negotiators with an extended consideration of all the parties involved. Their behavior at home and in love suggests that they are charming and elegant and that they fall for people with similar qualities. When it comes to the financial aspects of life, these natives tend to get involved in many business affairs but they also need to sleep on every decision they make and this sometimes makes them lose valuable opportunities. Their health is quite strong but since Libra is said to rule the kidneys and the adrenal glands, they are prone to suffer from affections concerning these areas.

With which of the four do you consider people belonging to October 13 are most benefited? You can answer this poll and see what others think:

What’s the luckiest feature of the October 13 Zodiac Sign?

October 13 Zodiac belongs to the second decan of LIBRA (October 3-October 13). This decan is under the supervision of the planet Uranus. Those born in this period are dependable and caring just like a true Libra and inquisitive just as Uranus makes them be. This period tempers the positive and negative characteristics of the Libra zodiac sign with a great accent on the positive ones.

Being born on the 13th day of the month means tolerance, honesty, adaptability and self discipline. The numerology for October 13 is 4. This number reveals creation combined with logic and a bit of stubbornness. Those Libra associated with number four are surely imaginative but also hard working and critical.

October is the tenth month of the year, bringing radiant activity and provision like activities. Those born in October are attentive and decisive. October 13 Zodiac people are introspective daydreamers. October symbols that resonate with these people are the Aquamarine and Opal as gemstones and the Calendula as plant. The name of this month comes from the Latin “octo”.

What statistics say about October 13 Zodiac?

In the Gregorian Calendar, October 13 is the 286th day of the year or the 287th day in leap years, while until the end of the year there are 79 days left. The forty third day of autumn, this is also the International Day for Disaster Reduction as recognized by the UN.

Libra is placed on the fifth position on the list of birth signs occurrence. Exuding masculine symbolism but also a general positive meaning, this is also considered of odd number. This defines extrovert people who are uninhibited and liberal. One of the archetypes used when talking about this sign is the Lawyer. There is said to be a peak of athletes and sportsmen in Libra.

Does the information on October 13 zodiac describe you?