As a Libra born on October 15th, you are very conscious of your surroundings and of what others may say but you also have your times in which you unleash your deepest desires and follow your intuition.

You seem to be very keen to amass knowledge, especially with age but it seems that your balance will be achieved by accomplishments in your family life. Prepare to read an outstanding report below.

Astrological symbol: Scales. This zodiac symbol is considered to influence those born September 23 - October 21, under the Libra zodiac sign. It is representative for knowledge, balance and justice.

The Libra Constellation is one of the twelve constellations of the zodiac. It is quite small spread on an area of only 538 square degrees. It covers visible latitudes between +65° and -90°. It lies between Virgo to the West and Scorpio to the East and has no first magnitude stars.

The Scales is named from the Latin Libra, the zodiac sign for October 15. In Italy it is named Bilancia while the Spanish call it Libra.

Opposite sign: Aries. This suggests revelation and productivity and shows that cooperation between the Aries and Libra sun signs is thought to be beneficial for both sides.

Modality: Cardinal. The modality proposes the hard working nature of those born on October 15 and their courage and protection in regard to most life events.

Ruling house: The seventh house. This means a place that puts great interest on partnerships and the importance of having the best people around. This is somehow the life quest of Libras and this is what they need to be satisfied.

Ruling body: Venus. This planet reflects passion and generosity. It also suggests the caution component. Venus is consistent with Aphrodite, the goddess of love in Greek mythology.

Element: Air. This element makes things heat up in association with fire, evaporates water and feels suffocated in combination with earth. Air signs born under the October 15 zodiac sign are versatile and creative intellectuals.

Lucky day: Wednesday. This cooperative day for those born under Libra is ruled by Mercury thus symbolizes abstract and passage.

More info on October 15 Zodiac below ▼ 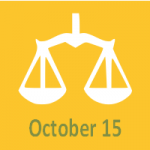 People born on October 15 are accepting and thoughtful. They are understanding and prefer to discuss anything that might be troubling them or those close. They take life with grace and know how to recognize and enjoy good entertainment. At the same time they dislike having to deal with sudden change and uncertainty. They prefer to be listened to and feel best when in the company of their partners.

Positive traits: Perceptive and caring, these natives are also very loyal and dependable. Libra people are usually full of perspective and pleasant. They always make sure their ideas and solutions take in consideration all the desires of the people involved. Those born under this sign also have a domestic and cautious nature.

Negative traits: Extreme worriers and sometimes subjective, these natives can transform from the most unfailing being in the world in the most childish one at a moments notice if they feel they are not being taken seriously. They can be quite supervising sometimes and often get engulfed in the obstacles of those around them, forgetting about their own troubles. They need to plan better as they panic a lot when dealing with sudden deadlines.

Love and Compatibility for October 15 Zodiac

Lovers born on October 15 are romantic and affectionate. They seek for a lifetime partner to whom they can commit and create a balanced and accomplishing relationship. They are attracted to enthusiastic and imaginative people that are as reliable as they are. You can conquer the heart of Libra if you are trustworthy and energetic. When they are single they are in no hurry to enter a relationship if they don't feel it's the right thing to do, they focus instead on their own self development.

October 15 Zodiac people are very attracted to the other air signs: Gemini and Aquarius as they tend to share the same vision of life. In life, Libra is constantly seeking for excitement in the shape of a humorous and creative partner who can bring some enthusiasm in their lives and the most suitable to offer them this is the native from Aquarius. Libra is thought to be least compatible with Aries. As for the rest of compatibilities between the other star signs and Libra, you know what they say, stars predispose but people dispose.

The lucky color for those born under the October 15 is represented by blue.

Blue symbolizes openness and balance. This zodiac color is advised to be used in accessories and items of clothing.

People who have blue as sign color are creative, trustworthy, reliable and tend to live a harmonious and balanced life. This hue, whether it is in a pale or a dark shade suggests and sooths the harmonious and attentive nature of the native in Libra.

The birthstone for Libras born with the October 15 is the calming Opal.

Opal is a precious material that denotes purity and sincerity. This zodiac birthstone could be used in accessories and bracelets.

This gemstone is said to relax and induce physical visions. It is thought to unleash the creative genius and might help Libra express their emotions and ideas in a clearer and convincing way. Opals are made from silica gel seeped into crevices in the sedimentary stratum. These particles are packed in a spherical pattern.

The flower for Libra natives born with the October 15 is Rose.

Rose is one of those plants that denote trustworthiness and loyalty. This zodiac flower could be used in gifts and accessories.

This generic symbol of love can embrace different meanings with different colors. This plant can be found during midspring to fall.

The metal considered to be representative for Libra natives with October 15 is Bronze.

Bronze symbolizes hard earned wealth and wisdom. This zodiac metal is advised to be used in pendants and earrings.

This metal is also related to artistic actions and warfare. It is said to influence and education of an entire nation. It was thought to influence human civilization and progress.

Those born on October 15 can be described as dreamy, helpful and entertaining but these natives are also very practical and reliable. Their attitude towards love and family suggests that they appreciate love at a deeper level than most people and make an entire celebration out of it. In regard to their behavior with money, these natives tend to be just as diplomatic, keeping a calm facade but paddling a lot underneath everyone's sight. When it comes to health, they should stay hydrated because their kidneys might pose some problems later on.

The below poll is made to show which do you think is the most successful area in the life of people belonging to October 15:

What’s the luckiest feature of the October 15 Zodiac Sign?

October 15 Zodiac belongs to the third decan of LIBRA (October 14-October 22). This decan is strongly influenced by the planet Mercury. This is representative for people who are sympathetic and dependable just like Libra and communicative spirits just like Mercury. This period tempers the positive and negative characteristics of the Libra zodiac sign, slightly enhancing the negative ones.

Being born on the 15th day of the month suggests pragmatism, responsibility and a lot of talent and devotion. The numerology for October 15 is 6. This number reveals responsibility, affection and a domestic approach to life. Those Libra associated with the number 6 enjoy spending time with families and building a safe environment for those they love.

October is the tenth month of the year, bringing the opportunity for provision like activities. Those born in October are attentive and modest. October 15 Zodiac people are opinionated but loyal. October has as representative symbols the Calendula as plant and the Aquamarine and Opal as gemstones. The name of this month comes from the Latin “octo”.

What statistics say about October 15 Zodiac?

October 15 is counted in the Gregorian Calendar as the 288th day of the year or the 289th day in leap years, while until the end of the year there are 77 days left. The forty fifth day of autumn, this is also the Global Handwashing Day.

Libra is the fifth most commonly met zodiac sign in the horoscope. A sign of positive meaning with harmonious energy, this exudes masculine energy and is considered an odd numbered sign. This describes extrovert people who are exuberant and emphatic. Amongst the archetypes used to characterize this sign there is the Lover. These natives are also rated as the greatest achievers in school.

Does the information on October 15 zodiac describe you?