As a Libra born on October 19th, you possess an impartial way of thinking and will always believe in genuine intentions. You have an innate sense of justice and are dependable and trustworthy.

Your deepest desires will surface at key moments in your life thus you will also have occasions to follow your intuition. Get ready to understand yourself better below.

Astrological symbol: Scales. This is the symbol of the Libra zodiac for people born September 23 - October 21. It is suggestive for the tactful and balance nature of these natives.

The Libra Constellation is one of the twelve constellations of the zodiac, with no first magnitude stars. It is quite small covering an area of only 538 square degrees. It lies between Virgo to the West and Scorpio to the East, covering visible latitudes between +65° and -90°.

The Scales is named in Latin as Libra, in Spanish as Libra while the Greeks name it Zichos.

Opposite sign: Aries. This is relevant in astrology because it shows that partnerships between the Libra and Aries sun signs are beneficial and highlight timidity and organization.

Modality: Cardinal. This quality of those born on October 19 shows exaltation and seriousness and also offers a sense of their controlling nature.

Ruling house: The seventh house. This house governs partnerships and the importance of people around. This suggests how critical it feels for Libras to surround themselves only with the best people, in order to grow and accomplish their dreams.

Ruling body: Venus. This celestial planet is said to influence anticipation and temper. It is also to be mentioned about the exposure of these natives. Venus is one of the seven classical planets that can be seen with the naked eye.

Element: Air. This element symbolizes movement and novelty and is considered to rule over intelligent and open people born on October 19. Air also gets new meanings in association with fire, making things heat up, evaporating water while earth seems to suffocate it.

Lucky day: Wednesday. This day is representative for the warm nature of Libra, is ruled by Mercury and suggests impartiality and communicative.

More info on October 19 Zodiac below ▼ 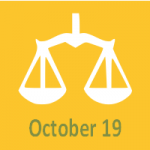 People born on October 19 are considerate and loving beings who try to lead a peaceful life, enjoying the beauty in the detail and trying all kinds of meditation and relaxation techniques. They dislike vanity and shallowness above all and you cannot offend them more than by not listening to them. They want to be understood in the same measure that they are thoughtful to those around them. They feel best in situations where they can come closer to other people and offer them support or mentorship.

Positive traits: These natives are utopian in path but often circumspect and with a great sense of justice. They might come up with highly avant-garde ideas as they are both pragmatic and attentive to details but at the same time they prefer assurance to risk so they often choose to follow the long and boring route. They set objectives for themselves and aver very focused and diligent in following them.

Negative traits: Born nit-pickers and sometimes subjective and fastidious, these natives need to be precise not to fall in any of the extremes, to either destroy their self esteem when they feel others are better than them or to become boastful and sarcastic from dealing with people they consider lower than themselves. They also need to understand that worrying can only make things worse and that they should rather put their faith that everything will be all right in the end.

Love and Compatibility for October 19 Zodiac

Lovers born on October 19 are romantic and loyal. They are attracted to enthusiastic and imaginative people that are as reliable as they are. You can conquer the heart of Libra if you are as trustworthy and affectionate as they are. This single native is completely focusing energy on their personal development and is in no way in a hurry to enter a relationship if they don't feel it's the right thing to do.

October 19 Zodiac people are most attracted to the other air signs: Gemini and Aquarius as they tend to share the same vision of life. In love, Libra is permanently seeking for a visionary partner to expand their horizon and the best to offer them this is the native born under Aquarius. The lover in Libra is said to be least compatible with Aries. As for the rest of partnerships between the other star signs and Libra, you know what they say, stars predispose but people dispose.

Blue is the color defined for October 19 and in general for Libra natives.

Blue suggests openness and symmetry. This zodiac color should be used in objects around the house and accessories.

The Libra birthstone used in astrology for those with October 19 is the versatile Opal.

Opal presents a precious stone that reflects clarity and sincerity. This zodiac birthstone is advised to be used in pendants and earrings.

This gemstone is said to be beneficial in eye ailments and for eye sight. It is also said to help the healing in many kinds of diseases by purifying the blood. Did you know that Opal is the official gemstone of Australia? Its name derives from the Greek "opallos" that means "to change color".

The lucky flower for those born under the October 19 is Rose.

Rose is one of those plants that denote trustworthiness and loyalty. This zodiac flower should be used in decorative items in the places these natives spend time.

Rose symbolizes passion and unconditional love but one of the main symbols is loyalty and purity of thought. This flower can be enjoyed during midspring to fall.

The metal for Libra natives born with the October 19 is Bronze.

Bronze is a metal that suggests wisdom and never ending power. The zodiac metal could be used in accessories and jewelry items.

This is a metal of monetary wealth, artistic creations and warfare. It is said to influence progress and human civilization.

Those born on October 19 are great at counseling and motivating others. They also make great planners and organizers as they tend to considerate all parts involved. They appreciate good company in general but in love, finding the right person is essential to their overall wellbeing. Their financial attitude can be summed as creative and adaptable as they do tend to go around a lot of things in order to provide for their families. Health is an interesting side for them as they tend to listen to their bodies and be careful about a lot of things but tend to forget the smallest ones, like staying hydrated enough.

At which of the four do you consider people belonging to October 19 are most successful? You can answer this poll and see how many people think like you:

What’s the luckiest feature of the October 19 Zodiac Sign?

October 19 Zodiac belongs to the third decan of LIBRA (October 14-October 22). This decan is influenced by the planet Mercury. Those born under this influence combine the sympathetic and dependable nature of Libra with the humorous and communicative nature of Mercury. This period tempers the positive and negative characteristics of the Libra zodiac sign with a great accent on the negative ones.

Being born on the 19th day of the month suggests idealism, independence and a highly competitive, detail oriented individual. The numerology for October 19 is 1. This number reveals revels leadership qualities, great will power and an original approach to life, all wrapped in a charming personality. Those Libra can only be proud of this association as this is the number of achievers, of those who see the bigger picture and are set to follow their goals no matter what.

October is the tenth month of the year, bringing radiant activity and provision like activities. Those born in October are attentive and decisive. October 19 Zodiac people are introspective daydreamers. October symbols that resonate with these people are the Aquamarine and Opal as gemstones and the Calendula as plant. The name of this month comes from the Latin “octo”.

What statistics say about October 19 Zodiac?

In the Gregorian Calendar, October 19 is placed as the 292nd day of the year or the 293rd day in leap years and there are 73 days left until the end of the year. The forty ninth day of autumn, this is also the Mother Teresa Day in Albania.

Libra is said to be the fifth most commonly met zodiac sign in the birth occurrence. Odd numbered sign, it is of positive meaning attached to a preponderant masculine symbolism. This is suggestive for extrovert natives who are sincere and soft. The Lover is an archetype used when talking about this sign. The highest achievers in school are said to be born under Libra.

Does the information on October 19 zodiac describe you?