Being a Scorpio born on October 30th, you are not afraid to show your real feelings and even suffer the consequences of this. You are comfortable with your artistic inclinations and may end up making a living out of this.

Intuitive by nature, you are also very romantic and will know what is right for you in love, at least at particular key times in your life. Prepare to read an outstanding horoscope profile below.

Astrological symbol: Scorpion. This symbol suggests the passionate and secretive nature of these individuals. It is characteristic for people born between October 23 and November 21 under the Scorpio zodiac sign.

The Scorpio Constellation with the brightest star being Antares is spread on 497 sq degrees between Libra to the West and Sagittarius to the East. Its visible latitudes are +40° to -90°, this being just one of the twelve zodiac constellations.

The Scorpion is named from the Latin Scorpio, the zodiac sign for October 30. In Greece it is named Scorpion while the Spanish call it Escorpion.

Opposite sign: Taurus. This is the sign directly across the zodiac circle from the Scorpio zodiac sign. It suggests secrecy and practicality and these two are considered to make great partnerships.

Modality: Fixed. This modality proposes the enthusiastic nature of those born on October 30 and their amicability and loving sense in regard to most life aspects.

Ruling house: The eighth house. This house rules over the material possessions of others, directed towards the permanent struggle of an individual to own everything that others around own. This also refers to mystery and the ultimate unknown that is death.

Ruling body: Pluto. This planet is said to govern over dedication and productivity and also reflects the impatience inheritance. Pluto is consistent with Hades, the god of the unseen in Greek mythology.

Element: Water. This is the element of emotions and transformation and rules over people born on October 30. Water as element combines with the other three to make things boil with fire, vaporize in the presence of air and shape earth.

Lucky day: Tuesday. This weekday is ruled by Mars symbolizing spotlight and farseeing. It reflects upon the passionate nature of Scorpio people and the brave flow of this day.

More info on October 30 Zodiac below ▼ 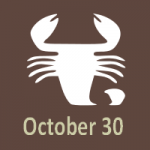 People born on October 30 are artistic and secretive, visionary and active. They love being in the spotlight but at the same time they prefer to spread enigma. They are strong and sentimental but can also prove a great logic. They make honorable mates but at the same time they are rapid to turn a cold shoulder if they sense even the slightest gesture of treason. They hate sudden transformation or being confronted about the arrangements they make.

Positive traits: Persuasive communicators, these natives are good both at planning and at being unpredictable and challenging. Scorpio people are courageous and can react unexpectedly fast when faced with relevant settings. They are inquisitive by nature and they want to know everything that is happening everywhere. Those born under this sign are also jovial and perceptive, being a funny company when in good temper.

Negative traits: Scorpio needs to learn to stop complaining and live every moment as it is, trying to make the best out of it. Those born on this day are possessive and controlling with the persons they attach to. They also tend to have fixed ideas they abandon really hard. They are changeable and clingy. They can be quite devious when they are set to obtain something, and they usually do it at any cost.

Love and Compatibility for October 30 Zodiac

Lovers born on October 30 are passionate and mysterious. They find it very hard to commit to one person, but when they do they become very loyal and reliable. Although they don't usually show it, they are very sensible and easily offended and should be handled with great care. They are attracted to persons who know how to combine praise with constructive criticism. You can conquer the heart of Scorpio if you are always there listening when they feel the need to open their hearts.

October 30 Zodiac people are very attracted to the other water signs: Cancer and Pisces as they tend to share the same vision of life. In life, Scorpio is constantly seeking for stability, protection and trustworthiness and the most suitable to offer them this is the native from Taurus. Scorpio is thought to be least compatible with Libra. As for the rest of compatibilities between the other star signs and Scorpio, you know what they say, stars predispose but people dispose.

The preferred color for Scorpio zodiac is deep red.

This color emanates action and drives everyone's attention and this is exactly what the mysterious native in Scorpio wants.

Other hues that appeal to people born on October 30 are violet, scarlet and carmine.

The sign stone for Scorpio is the distinguished Topaz.

This precious stone is said to enhance and stimulate all the innate characteristics of an individual, both positive and negative. Topaz also symbolizes friendship and constancy.

Other sign stones that are thought to bring luck to people born on October 30 are Onyx and Garnet.

The representative flower for Scorpio zodiac is Chrysanthemum.

This flower can be used as a peace bringing decoration as it is said to clear bad energies from around it. Chrysanthemum also symbolizes warmth and relaxation.

Other flowers suggestive for Scorpio are Roses and Geranium.

Iron is the characteristic metal for Scorpio zodiac.

This strong metal suggests the force of fiery Scorpio who is easily stimulated just like Iron can be magnetized. Iron rusts when left in moist air and just as the Scorpio native should be handled with care.

Another metal considered beneficial for people born on October 30 is Silver.

As a personality, those born on October 30 are sensitive to even the slightest mistake but also invest a lot in their own development and in helping those who captivate their interest. In love and family they can be measured and cautious but often passion wins them over and they tend to think with their hearts rather than minds. When it comes to money, they are intuitive and use their potential and relations to maximum. In health, they are prone to ailments of the reproductive organs.

What do you consider is the gift those belonging to October 30 were given by mother nature? Share your point of view by answering the following poll:

What’s the luckiest feature of the October 30 Zodiac Sign?

Being born on the 30th day of the month shows friendliness, enthusiasm but also reliability and hard work. The numerology for October 30 is 3. This number reveals great human interactions and all kinds of communication. People ruled by number three sure know their way around words. The association between Scorpio and this number will surface eloquence and great people skills in the first.

October is the second autumn month in the Northern Hemisphere, bringing all that autumn has to offer from harvest to heavy rain. Those born in October are orderly and decisive. October 30 Zodiac people are dependable and modest. The symbols for October include the Aquamarine and Opal as gemstones and the Calendula as plant. The name of this month comes from the Latin “octo”.

What statistics say about October 30 Zodiac?

In a year in the Gregorian Calendar, October 30 is the 303rd day or the 304th day in case of leap years and until the end of the year there are left 62 days. The sixtieth day of autumn, this is also the Mischief Night in the United States.

Scorpio is situated first place in terms of popularity as a birth sign on the list of most met to least met zodiac signs. Being an even numbered sign, this exudes a negative polarity and a feminine symbolism. This suggests introvert people who are hesitant and self-sufficient. One of the archetypes used when talking about this sign is the Witch. Those born in autumn, are said to make great sportsmen.

Does the information on October 30 zodiac describe you?