Being a Libra born on October 6th, your tendencies are rather conflicting. On one hand, you are chasing excitement and set up courageous goals and on the other, you prefer the calm and peace of your family and modest existence.

You may be challenged during your young years and this will teach you a sense of logic and consciousness. Get ready to better understand your astrological profile in the following rows.

Astrological symbol: Scales. This symbolizes tact, balance, stability out of two forces and sense of justice. It influences people born between September 23 and October 22 when the Sun is in Libra, the seventh zodiac sign.

The Libra Constellation is spread on an area of 538 sq degrees between Virgo to the West and Scorpio to the East. Its visible latitudes are +65° to -90° and it has no first magnitude stars.

The Greeks name it Zichos while the Italians prefer their own Bilancia, however the origin of the October 6 zodiac sign, the Scales, is the Latin Libra.

Opposite sign: Aries. This suggests orderliness and courage and shows how Aries natives are thought to represent and have everything Libra sun sign people ever wanted.

Modality: Cardinal. Shows how much bravery and challenge exists in the lives of those born on October 6 and how goal-driven they are in general.

Ruling house: The seventh house. This means that Libras are placed in a house which puts great interest on partnerships and the importance of having the best people around. This is somehow the life quest of Libras and the point that when achieved can bring the most satisfactions.

Ruling body: Venus. This connection seems to suggest aesthetics and optimism. Venus is one of the planets with double rulership, over Taurus and Libra. This also shows a focus on sincerity.

Element: Air. This element suggests an emotional experimentation of life through each of its stages and a sense of approachability throughout for people born under the October 6 zodiac sign. When associated with the other three elements, it either heats, dissipates or smothers them.

Lucky day: Wednesday. This weekday is ruled by Mercury symbolizing reason and consciousness. It reflects upon the fair nature of Libra people and the orderly flow of this day.

More info on October 6 Zodiac below ▼ 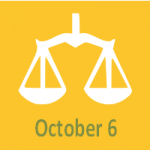 People born on October 6 are caring and understanding and everyone around them can count on their helping hand. They appreciate small gestures and good entertainment and they are in general happy with the life they have. They are thoughtful and dislike shallow people above anything else. They feel most at ease when in the company of their partners and if this happens in a quiet evening, even better.

Positive traits: These natives are circumspect and rational when it comes to their long term objectives and the cohesion of what they've built around them but can be highly utopian and avant-garde with other people. They share their ideas and eagerness rapidly but they are also the ones to come with the rational path and enlist the obstacles on the way. They are efficient and accommodating and often surprise others with their stubbornness.

Negative traits: To chill and stop over thinking is one thing Libra needs to learn. Worrying only makes them act hastily. Those born on this day are distressed and over thinking at times. They are sometimes subjective and egotistic despite their fame of being the most helpful and accepting people. They also have their moments of being way too belittling and fastidious.

Love and Compatibility for October 6 Zodiac

Lovers born on October 6 are romantic and affectionate. They seek for a lifetime partner to whom they can commit and create a balanced and accomplishing relationship. They are attracted to enthusiastic and imaginative people that are as reliable as they are. You can conquer the heart of Libra if you are trustworthy and energetic. When they are single they are in no hurry to enter a relationship if they don't feel it's the right thing to do, they focus instead on their own self development.

October 6 Zodiac people are very attached to the other two air signs: Gemini and Aquarius as they tend to share the same vision of life. In life, Libra is in a constant search for an active and visionary partner to expand their horizon and the one to offer them this is the native in Aquarius. The lover in Libra is thought to be least compatible with Aries. As for the rest of compatibilities between the other star signs and Libra, you know what they say, stars predispose but people dispose.

Blue is the color said to be representative for Libra people born with October 6.

Blue as a hue, is the symbol of balance, peacefulness and soothing. This zodiac color should be used in objects around the house and accessories.

People having blue as sign color prefer to keep to themselves and while it is very hard to gain their trust, once this is done, they are the most dependable and compassionate people. This hue, whether it is in a pale or a dark shade suggests and sooths the harmonious and attentive nature of the native in Libra.

The birthstone that is representative for Libras with October 6 is the rare and gentle Opal.

Opal presents a precious stone that reflects clarity and sincerity. This zodiac birthstone is advised to be used in pendants and earrings.

This precious stone is said to boost creativity and inspiration in even the most realistic and plain Libra. Opal suggests a hopeful and visionary nature. Did you know that Opal is the official gemstone of Australia? Its name derives from the Greek "opallos" that translates into "to change color".

The flower used in astrology for those with October 6 is Rose.

Rose is a plant that symbolizes loyalty and trust. The zodiac flower could be used in gifts and decorative items.

Other plants that suit Libra natives are the flowers of all fruit trees.

Bronze is the metal of preference for Libra natives, especially those born under the October 6.

This is a metal that symbolizes great wealth coupled with wisdom. This zodiac metal should be used in bracelets and other accessories.

When talking about the personality of those born on October 6, their power of concentration and even meditation should be highlighted, as well as their ability to help others open up. Regarding their love and family life, they find love to be the ultimate expression so they leave the real feelings aside for when the right person comes. When it comes to their approach in their financial life, they tend to go with their vocation, although that doesn't necessarily bring them the best return. As for health, they seem to have a strong sensibility in the lumbar region, talking about spine bones, marrow, nerves and the kidneys.

With which of the four do you consider people belonging to October 6 are most benefited? Answer the following poll and see what other's think:

What’s the luckiest feature of the October 6 Zodiac Sign?

October 6 Zodiac belongs to the second decan of LIBRA (October 3-October 13). This decan is strongly influenced by the planet Uranus. This is representative for people who are affectionate and understanding just like Libra and curious and enthusiastic just like Uranus. This period is said to temper the characteristics of the Libra zodiac sign.

Being born on the 6th day of the month shows a perseverant individual who is also generous, tender and caring. The numerology for October 6 is 6. This number reveals responsibility, affection and a domestic approach to life. Those Libra associated with the number 6 enjoy spending time with families and building a safe environment for those they love.

October is the tenth month of the year, bringing the opportunity for provision like activities. Those born in October are attentive and modest. October 6 Zodiac people are opinionated but loyal. October has as representative symbols the Calendula as plant and the Aquamarine and Opal as gemstones. The name of this month comes from the Latin “octo”.

What statistics say about October 6 Zodiac?

In the Gregorian Calendar, October 6 is the 279th day of the year or the 280th day in leap years, while until the end of the year there are 86 days left. The thirty sixth day of autumn, this is also the Memorial Day for the Martyrs of Arad in Hungary.

Libra is the fifth zodiac sign in order from most common to least commonly met. Odd numbered sign, it is of positive meaning and considered to carry a masculine symbolism. This portrays extrovert people who are amicable and very open. An archetype used to describe this sign is the Flirt. Libra is reckoned as the sing carrying the best chances for a happy marriage.

Does the information on October 6 zodiac describe you?