As a Virgo born on September 1st, you possess a charming and honest personality. You don't waste any occasion to tell others what you really think about them and are not afraid of consequences.

You tend to build your confidence in time and whether you want it or not, there will be a lot of moments in life when you will be in the spotlight. Prepare to read an exceptional horoscope profile below.

Astrological symbol: Maiden. This symbolizes knowledge, shyness, clarity of thought and an introspective behavior. It influences people born between August 23 and September 22 when the Sun is in Virgo, the sixth zodiac sign.

The Virgo Constellation, one of the 12 constellations of the zodiac is placed between Leo to the West and Libra to the East and its visible latitudes are +80° to -80°. The brightest star is Spica while the whole formation is spread on 1294 sq degrees.

The name Virgo is the Latin name for Virgin. In Greece, Arista is the name of the sign for September 1 zodiac sign, while in France they use Vierge.

Opposite sign: Pisces. In astrology, these are the signs placed opposite on the zodiac circle or wheel and in the case of Virgo reflect upon conservationism and brightness.

Modality: Mobile. This shows how much clairvoyance and observance exists in the lives of those born on September 1 and how broad minded they are in general.

Ruling house: The sixth house. This is a space of performance, health and services. This is why Virgoans are so hard working and overly critical and also explains the interest they take in health matters and why they are prone to hypochondriac episodes.

Ruling body: Mercury. This planet is said to govern over freedom and emotions and also reflects the help inheritance. Mercury is known as the messenger of the gods in Greek mythology.

Element: Earth. This is an element with multiple significances in relationship to the other three as it assimilates air and lets itself be shaped by water and fire. It rules over the sense of justice and awareness of those born under the September 1 zodiac sign.

Lucky day: Wednesday. This is a day ruled by Mercury, therefore symbolizes experience and ingenuity and identifies best with the Virgo natives who are fussy.

More info on September 1 Zodiac below ▼ 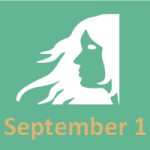 People born on September 1 have a great sense of duty and are down to earth, attentive and loyal. Just like a true Virgo, they are eager and amicable. They appreciate having everything organized around and to take their time off to disconnect and rediscover themselves. They dislike ignorance and commonness. Those born under this sign enjoy settings where they can meet ingenious people.

Positive traits: The natives in this sign are cautious and careful with most life aspects and although they might seem as risk takers at time, they only adventure in territories that they are sure of. They are some of the best visionaries so everyone should take their advice in consideration. They are focused and progressive in their approach and not everyone can keep up with their pace.

Negative traits: These natives rarely forget and forgive so don't be surprised if you are not in their grace because of something that happened years ago. They are overly attentive to every detail when they are focused on something and they follow and prosecute every small mistake although when it comes to their own mistakes, they often try to hide them or change the subject.

Love and Compatibility for September 1 Zodiac

Lovers born on September 1 are affectionate and dependable. They leave passion aside in order to build a dependable and trustworthy relationship. They may not be those with whom you can party all the time but they are sure those with whom you want to settle. They are attracted to people that are sensible and reliable just like them but also to emotional people with whom they can offer support and guidance. You can conquer the heart of Virgo by listening to them and by accepting their need for order and stability.

September 1 Zodiac people seem to be most attracted to the other earth signs: Taurus and Capricorn as they tend to share the same vision of life. In love, Virgo is in a permanent search for someone to nurture, help grow and to whom they can give everything they have and the best to offer this occasion to them is the native born under Pisces. The lover in Virgo is said to be least compatible with Leo. As for the rest of partnerships between the other star signs and Virgo, you know what they say, stars predispose but people dispose.

Navy blue is the representative color for those born under the September 1.

Navy blue suggests great elegance and this is extremely attractive to the refined Virgo. This zodiac color is advised to be used in accessories and items of clothing.

People who have navy blue as sign color are creative, attractive and moody. They also have their moments of introspection and revelations. They have a tendency to keep to themselves, be it that we're talking about hidden feelings or even casual activities.

The lucky Virgo birthstone for those born under the September 1 is the dignified Sapphire.

This is a precious stone that symbolizes honesty and dependability. This zodiac birthstone could be used in accessories and bracelets.

This is thought to reveal and enhance only the positive innate characteristics of an individual. This gemstone comes in white, blue and pink shades.

Another gemstone considered beneficial for Virgo natives is Amethyst. It represents sobriety and wisdom.

Morning Glory is the flower defined for September 1 and in general for Virgo natives.

This plant is known to symbolize analysis and observant spirit. This zodiac flower should be used in decorations and other accessories.

This is a tidy flower growing exactly where planted just as the attentive Virgo organizes everything around. This flower can be found during early spring mornings.

Other flowers representative for Virgo are Clovers and Poppies.

Platinum is the metal said to be representative for Virgo people born with September 1.

Those born on September 1 are great at organizing and keeping everything neat and precisely arranged. Their behavior at home and in love suggests that they are big on fidelity and responsibility and sometimes give up passion and fun to have those. When it comes to their approach in their financial life, they are great savers and do make a long life plan that they tend follow responsibly. In health, they take a lot of care of their bodies but they are also highly hypochondriac and this tend to occupy a lot of their time.

The next poll is made to reveal which do you believe is the most beneficial area in the life of those belonging to September 1:

What’s the luckiest feature of the September 1 Zodiac Sign?

September 1 Zodiac belongs to the first decan of VIRGO (August 23-September 2). This decan is under the supervision of the planet Mercury. Those born in this period are analytical and hard working just like a true Virgo and friendly and communicative just as Mercury makes them be. This period is also said to magnify all the positive and negative characteristics of the Virgo zodiac sign.

Being born on the 1st day of the month shows a lot of independence, loyalty and energy. The numerology for September 1 is 1. This number reveals revels leadership qualities, great will power and an original approach to life, all wrapped in a charming personality. Those Virgo can only be proud of this association as this is the number of achievers, of those who see the bigger picture and are set to follow their goals no matter what.

September is the ninth month of the year, bringing the beginning of most educational years. Those born in September are decisive and motivated. September 1 Zodiac people are very confident and charming. September symbols that resonate with these people are the Sapphire and Sardonyx as gemstones and Aster and Morning Glory as plants. The name of this month comes from the Latin “septem”.

What statistics say about September 1 Zodiac?

September 1 is the 244th day of the year, or the 245th day in leap years, in the Gregorian Calendar. This is the first day of autumn and there are 121 days left until the end of the year. This is also the Random Acts of Kindness Day in New Zealand.

Virgo is placed second on the list with the popularity of zodiac signs in terms of occurrence. Even numbered sign, it is of negative polarity and considered to carry a feminine symbolism. This is defining for introvert natives who are contemplative and self-assured. The archetype used to describe this sign is the Martyr. It is said that in families with one parent Virgo there is the least number of babies.

Does the information on September 1 zodiac describe you?