As a Virgo born on September 11th, you are meticulous and practical. You don't seem to let any detail to chance, especially when it comes to personal endeavours.

In time, you will learn how to relax a bit but until you get there, life will be lived in the fast lane. It is very hard for others to change your mind, especially when you care deeply about something. Prepare to read an outstanding personality report below.

Astrological symbol: Maiden. This symbol is representative for those born August 23 - September 22, when the Sun transits the Virgo zodiac sign. It reflects upon the wise and pure nature of these individuals.

The Virgo Constellation is one of the twelve constellations of the zodiac, covering visible latitudes between +80° and -80°. It lies between Leo to the West and Libra to the East on an area of 1294 square degrees as the second largest constellation. The brightest star is called Spica.

The Virgin is named from the Latin Virgo, the zodiac sign for September 11. In Italy it is named Vergine while the French call it Vierge.

Opposite sign: Pisces. Partnerships between the Virgo and Pisces sun signs are considered auspicious and the opposite sign reflects upon the surrounding resourcefulness and emotions.

Modality: Mobile. This quality of those born on September 11 shows detachment and persistence and also offers a sense of their admirable nature.

Ruling house: The sixth house. This house rules over services, work tasks and health. This suggests that Virgoans are very analytical and efficient at their work place but are also very careful about their health.

Ruling body: Mercury. This celestial planet is said to influence closeness and secrecy. It is also to be mentioned about the modesty of these natives. Mercury is the only planet with exaltation and rulership on the same sign, Virgo.

Element: Earth. This element incorporates practicality and an interestingly cautious dynamic in the lives of those born on September 11.

Lucky day: Wednesday. Under the governing of Mercury, this day symbolizes conversation and connection. It is suggestive for the Virgo natives who are kind.

More info on September 11 Zodiac below ▼ 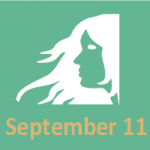 People born on September 11 are systematic and fair. They are convivial and active by nature but also dignified and don't usually force things in any way. They are ingenious and enjoy both tasks that require attention and art related enterprises. They feel the need to be supported in their projects but at the same time they prefer to do things themselves if the alternative involves disorderliness in any way. They love to spend their time engaged in mind challenging enterprises.

Positive traits: The natives in this sign seem to come up with a solution to any problem that is being presented to them. This because they are observant and analytical and love to take things one step at a time but also they don't waste any time on irrelevant details while they search for the bigger picture. They are attentive and determined and invest a lot of effort in their work so the results don't let them down.

Negative traits: These natives are worriers and calculators by nature so they usually balance all risks before they do anything. This often leaves them frustrated by the chances they miss but they don't realize why this is happening and then take it all on others. They can be quite manipulative but at the same time with other people they are very naive and risk being taken as fools.

Love and Compatibility for September 11 Zodiac

Lovers born on September 11 are loyal and affectionate. They may not be those partners with whom you party and go on crazy adventures but they sure are those with whom you want to settle. They see a relationship as the union between two souls and are 100% committed once they take settle. They are attracted to intelligent and trustworthy persons whom can offer the same degree of reliability as them. You can conquer the heart of Virgo by being an honest and supportive partner.

September 11 Zodiac people seem to be most attracted to the other earth signs: Taurus and Capricorn as they tend to share the same vision of life. In love, Virgo is in a permanent search for someone to nurture, help grow and to whom they can give everything they have and the best to offer this occasion to them is the native born under Pisces. The lover in Virgo is said to be least compatible with Leo. As for the rest of partnerships between the other star signs and Virgo, you know what they say, stars predispose but people dispose.

Navy blue is the color defined for September 11 and in general for Virgo natives.

Navy blue as a hue, is the symbol of elegance, calm and depth. It is a sparkling shade for Virgo natives. This zodiac color is advised to be used in accessories and items of clothing.

Those with navy blue as sign color have artistic personalities, are impulsive and more likely to be picky and emotionally insecure. They have a tendency to keep to themselves, be it that we're talking about hidden feelings or even casual activities.

Other colors that suit Virgo natives are orange, beige and earth tones.

The birthstone for Virgos born with the September 11 is the dignified Sapphire.

This is a precious stone that symbolizes honesty and dependability. This zodiac birthstone could be used in accessories and bracelets.

This gemstone is said to be able to alleviate all kinds of pain and also to improve any blood or glandular condition. Each Sapphire color is said to have its own unique healing properties. This gemstone comes in white, blue and pink shades.

Morning Glory is the representative flower for those born under the September 11.

Morning Glory is a known symbol of reflection and affection. This zodiac flower could be used in gifts and accessories.

Morning Glory symbolizes the importance, beauty and quick passage of life. This plant can be found during spring early mornings.

Other flowers for Virgo people are Clovers and Poppies.

The metal used in astrology for those with September 11 is Platinum.

Platinum is a metal that suggests power and wealth. This zodiac metal should be used in all kinds of jewelry items that are to be worn frequently.

Being one of the rarest metals on Earth, it is associated with exclusivity and prestige. Being resistant to tarnish and wear platinum is frequently used in electronic equipments.

Those born on September 11 can be characterized as energetic and mentally aware. They are intelligent individuals but also have a lot of emotional skill and know how to read a person. When it comes to family and love life, perfectionism is the foundation but they can also fall desperately in love with not necessarily the right person for them. In regard to their behavior with money, it is not uncommon for them to have several jobs at a time and to sacrifice their free time for something bigger. Speaking about the health side of life, they can be a bit neurotic when their hypochondriac complaints are not being taken seriously.

What do you consider is the best thing those belonging to September 11 were offered by mother nature? Answer this poll and see how many people think like you:

What’s the luckiest feature of the September 11 Zodiac Sign?

September 11 Zodiac belongs to the second decan of VIRGO (September 3-September 13). This decan is influenced by the planet Venus. Those born under this influence combine the attention and hard work of Virgo with the financial wisdom of Saturn. This period tempers the positive and negative characteristics of the Virgo zodiac sign, slightly enhancing the positive ones.

Being born on the 11th day of the month suggests a remarkably confident and perceptive motivator willing to sacrifice for his peers. The numerology for September 11 is 2. This number reveals balance and partnerships. It is the representative number for the desire of harmony and peace. Those Virgo associated with this numerology can become great mediators and with age they will only turn wiser, gentler and incredibly more considerate to other people.

September is the first autumn month in the Northern Hemisphere, bringing the return to education and careers after the long summer. Those born in September are motivated and analytical. September 11 Zodiac people are cautious but understanding. The symbols for September include the Sapphire and Sardonyx as gemstones and Aster and Morning glory as plants. The name of this month comes from the Latin “septem”.

What statistics say about September 11 Zodiac?

September 11 is counted in the Gregorian Calendar as the 254th day of the year or the 255th day in leap years, while until the end of the year there are 111 days left. The eleventh day of autumn, this is also the Patriot Day in the United States.

Virgo is the second most popular zodiac sign on the list of most common to least common astrology signs. Exuding negative polarity and a tranquil energy, this is an even numbered sign with a feminine symbolism. This is characteristic for introvert people who are self-interested and quite intransigent. The Alchemist is an archetype used when referring to this sign. This was rated as the sign with the most educated natives but is also included in the chart with natives that have less babies than average.

Does the information on September 11 zodiac describe you?