Being a Libra born on September 26th, you are resilient and creative. You don't let go, even when others have told you that there is no result.

You make a charming companion and can easily be put in any kind of formal situation and fare just fine. At some point in your life, you will play a very important role for someone special. Prepare to read an exceptional personality report below.

Astrological symbol: Scales. It is representative for people born between September 23 and October 22 when the Sun is in Libra. This symbol denotes the balanced and moral nature of these individuals.

The Libra Constellation is one of the 12 zodiac constellations, placed between Virgo to the West and Scorpio to the East on an area of 538 sq degrees, having no first magnitude stars and the most visible latitudes +65° to -90°.

The Spanish call it Libra while the Greeks use the name Zichos for the September 26 zodiac sign but the real origin of the Scales is in the Latin Libra.

Opposite sign: Aries. This is the sign directly across the zodiac circle from the Libra zodiac sign. It suggests friendliness and optimism and these two are considered to make great partnerships.

Modality: Cardinal. This can suggest how much independence and generosity exists in the lives of those born on September 26 and how careful they are in general.

Ruling house: The seventh house. This house symbolizes close partnership, the exact opposite of the egotistic house one of self. Whether it refers to a spouse or a business partnership this is the turning point in the Libra's life quest.

Ruling body: Venus. This celestial body is said to influence affection and high spirit . It is also relevant from the naivety perspective. Venus represents feminine energy opposing the masculine energy of Mars.

Element: Air. This element suggests the sense of realism and caution in the life of those born under the September 26 zodiac sign and determines him or her to be even more aware and engaged. Combined with the element earth, air seems to smother or incorporate in it.

Lucky day: Wednesday. This dim day for those born under Libra is ruled by Mercury thus symbolizes conversation and liberation.

More info on September 26 Zodiac below ▼ 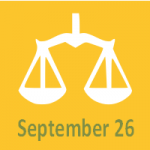 People born on September 26 are charming, relaxed and great with words. Just like a true Libra, they are caring and understanding with almost all people they meet. They appreciate good entertainment and receiving small and thoughtful presents as thank you from people they have helped. They dislike shallow people and having to deal with sudden change. Those born under this sign enjoy the occasions to spend time with their partners and enjoy a quiet evening.

Positive traits: These natives are supportive of those around them and often come up with ways to make their lives easier. When it comes to their lives, they prefer to keep a cautious display and do things in an orderly manner, often through hard work. They have a great sense of justice but are also practical and seem to set approachable and realistic long term goals for themselves and those in their families.

Negative traits: One of the things Libra needs to learn is to take time for themselves and sometimes stop worrying for the problems of others. Those born on this day are sometimes superficial and skeptic when others come with ideas or plans they haven't thought of. Despite their fame of being the most understanding and considerate people, they are sometimes intolerant, fastidious and selfish.

Love and Compatibility for September 26 Zodiac

Lovers born on September 26 are romantic and dependable. They are attracted to energetic people who can be as dependable as they are. When they decide to commit they do it for a lifetime. You can conquer the heart of Libra if you are as trustworthy and affectionate as they are. This single native is completely focusing energy on their personal development and is in no way in a hurry to enter a relationship if they don't feel it's the right thing to do.

September 26 Zodiac people are very attached to the other two air signs: Gemini and Aquarius as they tend to share the same vision of life. In life, Libra is in a constant search for an active and visionary partner to expand their horizon and the one to offer them this is the native in Aquarius. The lover in Libra is thought to be least compatible with Aries. As for the rest of compatibilities between the other star signs and Libra, you know what they say, stars predispose but people dispose.

The color for Libra natives born with the September 26 is blue.

Blue suggests openness and symmetry. This zodiac color should be used in objects around the house and accessories.

The attractive Opal is the birthstone defined for September 26 and in general for Libra natives.

This is a precious stone that symbolizes clarity and honesty. This zodiac birthstone could be used in accessories and bracelets.

This precious stone is said to boost creativity and inspiration in even the most realistic and plain Libra. Opal suggests a hopeful and visionary nature. Opals are made from silica gel seeped into crevices in the sedimentary stratum. These particles are packed in a spherical pattern.

Another gemstone considered lucky for Libra natives is Jade. It is the symbol of practical wisdom.

Rose is the representative flower for those born under the September 26.

Rose is a plant that symbolizes loyalty and trust. This zodiac flower is advised to be used for gifts and decorations.

This generic symbol of love can embrace different meanings with different colors. You can enjoy this flower during midspring to fall.

The lucky metal for those born under the September 26 is represented by Bronze.

This is a metal that symbolizes great wealth coupled with wisdom. This zodiac metal should be used in bracelets and other accessories.

Those born on September 26 are great at counseling and motivating others. They also make great planners and organizers as they tend to considerate all parts involved. They try to surround themselves with people alike them and also choose their love from this select circle so they ensure they can build on the right foundation. Immediate decision is not their forte so these natives usually prefer to sleep on decisions, however, once sold they do try their best. Their health is quite strong but since Libra is said to rule the kidneys and the adrenal glands, they are prone to suffer from affections concerning these areas.

At which of the four do you consider those belonging to September 26 are most successful? Share your opinion by answering this poll:

What’s the luckiest feature of the September 26 Zodiac Sign?

September 26 Zodiac belongs to the first decan of LIBRA (September 23-October 2). This decan is under the supervision of the planet Venus. Those born in this period are dependable and caring just like a true Libra and attractive and passionate just as Venus makes them be. This period is also said to magnify all the positive and negative characteristics of the Libra zodiac sign.

Being born on the 26th day of the month shows efficiency, dependability, perseverance and adaptability. The numerology for September 26 is 8. This number reveals ambition and great power but also an embrace of the spiritual side, later in life. Those Libra associated with number eight pragmatic and analytical doers in all life matters.

September is the ninth month of the year, bringing the beginning of most educational years. Those born in September are decisive and motivated. September 26 Zodiac people are very confident and charming. September symbols that resonate with these people are the Sapphire and Sardonyx as gemstones and Aster and Morning Glory as plants. The name of this month comes from the Latin “septem”.

What statistics say about September 26 Zodiac?

In the Gregorian Calendar, September 26 is placed as the 269th day of the year or the 270th day in leap years and there are 96 days left until the end of the year. The twenty sixth day of autumn, this is also the European Day of Languages.

Libra as popularity, is placed the fifth on the list of most common birth signs. Under a definite masculine symbolism, this odd number sign is considered to have a positive meaning with harmonious energy. This is suggestive for extrovert natives who are hearthy and liberal. Amongst the archetypes used to characterize this sign there is the Lover. There is a slight peak of athletes and other sportsmen born in Libra.

Does the information on September 26 zodiac describe you?