Being a Libra born on September 30th, you are confident and energetic and nothing seems to stand in your way when you want to accomplish something. You are clear and find it easy to follow others when they are right.

Accommodating with almost anyone, it doesn't take you long to get on board with the ideas of your friends. Prepare to read a comprehensive profile analysis in the following rows.

Astrological symbol: Scales. The sign of the Scales influences people born between September 23 and October 22, when in tropical astrology the Sun is considered to be in Libra. It refers to the tactful and balance nature of these natives.

The Libra Constellation lies between Virgo to the West and Scorpio to the East on an area of 538 sq degrees and has no first magnitude stars. Its visible latitudes are between +65° to -90°, this being one of the zodiac's twelve constellations.

The name Libra is the Latin definition for Scales, the September 30 zodiac sign. The Italians call it Bilancia while the Spanish say it is Libra.

Opposite sign: Aries. This suggests a certain sweetness and enthusiasm and shows that cooperation between the Aries and Libra sun signs is thought to be beneficial for both sides.

Modality: Cardinal. This indicates how much high spirit and imagination exists in the lives of those born on September 30 and how career driven they are in general.

Ruling house: The seventh house. This zodiac placement governs a space of partnership, team work and balance. This says a lot about the interests of Libras and their life perspectives.

Ruling body: Venus. This celestial planet reveals indulgence and a pioneering state and also highlights support. The Venus name comes from the Roman goddess of romance.

Element: Air. This element represents evolution and observation. Air takes on new significances in association with fire, making things heat up, vaporizing water while earth seems to smother it. It is recognized to make people born under the September 30 zodiac sign sharp and ingenious.

Lucky day: Wednesday. Under the governing of Mercury, this day symbolizes conversion and experience. It is suggestive for the Libra natives who are sociable.

More info on September 30 Zodiac below ▼ 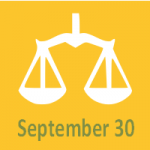 People born on September 30 are empathetic and loving. They seem to always try to save the world, at least with the small steps they can take and are great communicators although they are introspective beings as nature. They hate superficial people and not being be all listened to, therefore they feel most at ease when in setting where they are given the transformation to offer support and guidance.

Positive traits: These natives are pragmatic and efficient most times, taking the safe route and sometimes even routes other wouldn't have thought of. They are introspective and often prefer assurance to risk although their avant-garde nature allows them to come with enticing explanations. They have domestic natures and often their reason resides in the assurance of their families and in providing for them everything they need.

Negative traits: Sometimes intolerant and overly fastidious, they can make the lives of those close very difficult; especially when they don't feel they are in control. This doesn't mean that they need to exert some power but more like they prefer to monitor everything from afar and that people would respect and follow their advice. They are overly calculated and quite timid at times and this really prevents them from having genuine fun.

Love and Compatibility for September 30 Zodiac

Lovers born on September 30 are romantic and affectionate. They seek for a lifetime partner to whom they can commit and create a balanced and accomplishing relationship. They are attracted to enthusiastic and imaginative people that are as reliable as they are. You can conquer the heart of Libra if you are trustworthy and energetic. When they are single they are in no hurry to enter a relationship if they don't feel it's the right thing to do, they focus instead on their own self development.

September 30 Zodiac people are very attracted to the other air signs: Gemini and Aquarius as they tend to share the same vision of life. In life, Libra is constantly seeking for excitement in the shape of a humorous and creative partner who can bring some enthusiasm in their lives and the most suitable to offer them this is the native from Aquarius. Libra is thought to be least compatible with Aries. As for the rest of compatibilities between the other star signs and Libra, you know what they say, stars predispose but people dispose.

Blue is the color that is considered lucky for those Libra natives with September 30.

This hue denotes harmony, symmetry and aesthetics, just like Libra. This zodiac color is advised to be used in accessories and items of clothing.

People who have blue as sign color are creative, trustworthy, reliable and tend to live a harmonious and balanced life. The color blue symbolizes stability and calmness. It is one of the most popular choices of favorite color.

The attractive Opal is the birthstone defined for September 30 and in general for Libras.

This is a precious stone that symbolizes clarity and honesty. This zodiac birthstone should be used in all kinds of jewelry items that are to be worn frequently.

It is thought to unleash the creative genius and might help the wearer express their emotions and ideas in a clearer and convincing way. Did you know that Opal is the official gemstone of Australia?

The flower considered to be representative for Libra natives with September 30 is Rose.

Rose suggests never ending love, loyalty and passion. This zodiac flower should be used in decorations and other accessories.

Rose symbolizes passion and unconditional love but one of the main symbols is loyalty and purity of thought. This plant can be found during midspring to fall.

The metal used in astrology for those with September 30 is Bronze.

Bronze is a metal that suggests wisdom and never ending power. This zodiac metal could be used in accessories and decorative objects.

This is a metal of monetary wealth, artistic creations and warfare. It is said to influence progress and human civilization.

Another metal considered influential for Libra natives is Copper.

The personality of those born on September 30 can be described as active, understanding and a bit restrained as they try to juggle the aspects of their complex characters. Their vision in love suggests that although they might appear as fickle, they take their time just to ensure the right choice and after that they are more than harmonious and understanding. When it comes to the financial aspects of life, these natives tend to get involved in many business affairs but they also need to sleep on every decision they make and this sometimes makes them lose valuable opportunities. In regard to health, they are very preoccupied by maintain their youth and forget about other risks such as problems with their kidneys, that they are susceptible to.

What do you think is the best thing people belonging to September 30 were given by mother nature? By answering this poll you can share your opinion:

What’s the luckiest feature of the September 30 Zodiac Sign?

September 30 Zodiac belongs to the first decan of LIBRA (September 23-October 2). This decan is strongly influenced by the planet Venus. This is representative for people who are affectionate and reliable just like Libra and charming and emotional just like Venus. This decan is said to be magnifying all characteristics of the Libra zodiac sign, both positive and negative.

Being born on the 30th day of the month shows friendliness, enthusiasm but also reliability and hard work. The numerology for September 30 is 3. This number reveals great human interactions and all kinds of communication. People ruled by number three sure know their way around words. The association between Libra and this number will surface eloquence and great people skills in the first.

September is the first autumn month in the Northern Hemisphere, bringing the return to education and careers after the long summer. Those born in September are motivated and analytical. September 30 Zodiac people are cautious but understanding. The symbols for September include the Sapphire and Sardonyx as gemstones and Aster and Morning glory as plants. The name of this month comes from the Latin “septem”.

What statistics say about September 30 Zodiac?

In a year in the Gregorian Calendar, September 30 is the 273rd day or the 274th day in case of leap years and until the end of the year there are left 92 days. The thirtieth day of autumn, this is also the Blasphemy Day.

Libra is placed on the fifth position on the list of birth signs occurrence. Positive meaning and harmonious energy, this is an odd numbered sign with a predominantly masculine symbolism. This exemplifies extrovert natives who are cordial and hospitable. The Lover is an archetype used when talking about this sign. This is also known as the sign with the highest chances towards a happy marriage.

Does the information on September 30 zodiac describe you?