Being a Virgo born on September 4th, you are wise, concise and not afraid to try new things. You place yourself above mundanities and others may find you patronizing before they get to know the real you.

You have a straightforward nature and are not afraid to say what you think and often end up influencing others. Prepare to read a special horoscope profile below.

Astrological symbol: Maiden. The sign of the Maiden is influential for those born August 23 - September 22, when the Sun is considered to be in Virgo. It tries to suggest the virgin lady who is pure, fertile and wise.

The Virgo Constellation with the brightest star being Spica is spread on 1294 sq degrees between Leo to the West and Libra to the East. Its visible latitudes are +80° to -80°, this being just one of the twelve zodiac constellations.

The Virgin is named in Latin as Virgo, in French as Vierge while the Greeks name it Arista.

Opposite sign: Pisces. In astrology, these are the signs placed opposite on the zodiac circle or wheel and in the case of Virgo reflect upon analytic sense and abundance.

Modality: Mobile. The modality reveals the straightforward nature of those born on September 4 and their nicety and amicability in treating life in general.

Ruling house: The sixth house. This house rules over services, work tasks and health. This suggests that Virgoans are very analytical and efficient at their work place but are also very careful about their health.

Ruling body: Mercury. This connection suggests adaptability and sensibility. It also reflects on the honesty in the lives of these natives. Mercury is associated with the nervous and respiratory systems.

Element: Earth. This element suggests a life lived through all the senses. It is considered to influence people born under the September 4 zodiac sign into being grounded personalities. Earth also gets new meanings in association with the other elements, shaping things with water and fire and assimilating air.

Lucky day: Wednesday. This day is representative for the perfectionist nature of Virgo, is ruled by Mercury and suggests accessibility and brightness.

More info on September 4 Zodiac below ▼ 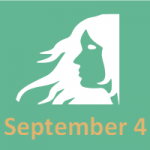 People born on September 4 are unfailing and diligent. Not only they are always involved in some sort of mind challenging activity but they are also precise in their path to life. They are honorable and have a rare sense of duty. They prefer to take the long way and be correct rather than cheat on the short way. They try to plan their life up to the last detail but this doesn't mean that they don't leave room for occasion and opportunity to occur.

Positive traits: These natives are considerate and patient beings. They are by nature close to the domestic side of life and try to build what they think represents the stability and security of their family. They are determined to achieve even the smallest thing they do and have the resources for that and also the openness to approach a new plan in case the first one gets them stuck somewhere.

Negative traits: These natives are timid and often are being played as naive by other people. They prefer to stay on good terms with everyone so this often leaves them uncovered and end up doing things for others. They are also extremely worrisome and risk loosing a lot of nice moments in life because of the extra cautions that they seem to be taking all the time.

Love and Compatibility for September 4 Zodiac

Lovers born on September 4 are affectionate and dependable. They leave passion aside in order to build a dependable and trustworthy relationship. They may not be those with whom you can party all the time but they are sure those with whom you want to settle. They are attracted to people that are sensible and reliable just like them but also to emotional people with whom they can offer support and guidance. You can conquer the heart of Virgo by listening to them and by accepting their need for order and stability.

September 4 Zodiac people are very attracted to the other earth signs: Taurus and Capricorn as they tend to share the same vision of life. In life, Virgo is constantly seeking for a project lover they can support and help develop and the most suitable to give them this occasion this is the native from Pisces. Virgo is thought to be least compatible with Leo. As for the rest of compatibilities between the other star signs and Virgo, you know what they say, stars predispose but people dispose.

The lucky color for Virgo zodiac is navy blue.

This is a rich and refined hue that stimulates but also sooths the elegant and analytical native in Virgo. The power color can be used in things around, from clothes, decorations to even the color of the vehicle.

Other hues that appeal to people born on September 4 are orange, beige and earth tones.

The birthstone for Virgos is the sharp and sophisticated Sapphire.

This precious material is the symbol of sincerity and constancy. It is said to focus positive energies on enhancing the benefic innate characteristics of an individual.

Other gemstones that are thought to influence people born on September 4 are Amethyst and Peridot.

Morning Glory is the characteristic flower for Virgo zodiac.

Morning Glory suggests the quick and full of beauty passage of life. It is a flower blossoming and dyeing in a short period of time that grows exactly where planted.

Other lucky flowers for Virgo include Poppy and Clover.

The representative metal for Virgo zodiac is Platinum.

Being one of the rarest metals on Earth it is associated with exclusivity and prestige. Platinum is also a symbol for wealth and inner strength.

Another metal considered to bring luck to people born on September 4 is Mercury.

Those born on September 4 can be described as disciplined and attentive but also very supportive to people who win their respect. Their vision in love suggests meticulousness, excellent manners and a strive for taking things to a higher level. They make great researchers, executives and analysts. Speaking about health, they are prone to digestive issues, minor in general but for them these do take serious proportions.

At which of the four do you think people belonging to September 4 are most successful? You can answer this poll and see what others think:

What’s the luckiest feature of the September 4 Zodiac Sign?

September 4 Zodiac belongs to the second decan of VIRGO (September 3-September 13). This decan is under the supervision of the planet Saturn. Those born in this period are analytical and realistic just like a true Virgo and financially wise just as Saturn makes them be. This period tempers the positive and negative characteristics of the Virgo zodiac sign with a great accent on the positive ones.

Being born on the 4th day of the month shows these people are hard working, meticulous and self disciplined. The numerology for September 4 is 4. This number reveals creation combined with logic and a bit of stubbornness. Those Virgo associated with number four are surely imaginative but also hard working and critical.

September is the ninth month of the year, bringing the beginning of most educational years. Those born in September are decisive and motivated. September 4 Zodiac people are very confident and charming. September symbols that resonate with these people are the Sapphire and Sardonyx as gemstones and Aster and Morning Glory as plants. The name of this month comes from the Latin “septem”.

What statistics say about September 4 Zodiac?

In a year in the Gregorian Calendar, September 4 is the 247th day or the 248th day in case of leap years and until the end of the year there are left 118 days. The fourth day of autumn, this is also the Newspaper Carrier Day in the United States.

Virgo is the second most popular zodiac sign on the list of most common to least common astrology signs. Considered to be of feminine symbolism, it has a general negative polarity and is an even number sign. This describes introvert natives who are reticent and self-containing. The Analyst is an archetype often used when describing this sign. Less babies than on average are said to be found in families with at least one parent Virgo.

Does the information on September 4 zodiac describe you?