Being a Virgo born on September 6th, you are analytical and sociable. You live through all your senses and make use of every interaction you have.

You also enjoy spending time with new people and are not afraid to make new acquaintances. In terms of health, you will come to a time when you will be very concerned about it. Prepare to read an outstanding horoscope profile below.

Astrological symbol: Maiden. The sign of the Maiden influences people born between August 23 and September 22, when in tropical astrology the Sun is considered to be in Virgo. It represents the virgin lady who is fertile and wise.

The Virgo Constellation is one of the twelve constellations of the zodiac and lies between Leo to the West and Libra to the East. The brightest star is called Spica. This constellation is the second largest, spread on an area of only 1294 square degrees and covering visible latitudes between +80° and -80°.

In Italy it is named Vergine while the French call it Vierge. However, the Latin origin of the Virgin, the September 6 zodiac sign is Virgo.

Opposite sign: Pisces. This is the sign directly across the zodiac circle from the Virgo zodiac sign. It suggests sincerity and idealism and these two are considered to make great partnerships.

Modality: Mobile. This suggests courtesy and a chatty figure and also how humorous natives born on September 6 are in reality.

Ruling house: The sixth house. This house represents the space of service and health. It relates to efficiency, perseverance and care for the physical body. This explains the analytical and hard working Virgo who is sometimes prone to hypochondriac episodes.

Ruling body: Mercury. This combination suggests eagerness and unicity. Mercury governs over short distance travel. Mercury is also representative for the grace of these natives' existences.

Element: Earth. This is an element that easily combines with the other three and while it lets itself be shaped by water and fire it incorporates air, this being similar to the reactions of those born on September 6 when in relation to the other elements.

Lucky day: Wednesday. This is a day ruled by Mercury, therefore symbolizes exchange and experience and identifies best with the Virgo natives who are conservative.

More info on September 6 Zodiac below ▼ 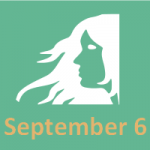 People born on September 6 are dignified, systematic and have a great sense of duty. Just like a true Virgo, have and active and convivial nature. They enjoy art, ingenious people and to be supported in their various projects. They dislike commonness and disorder. Those born under this sign like to spend time involved in time and mind challenging tasks.

Positive traits: Sharp minded and detail oriented, these natives are also very modest and kind. It is really hard to win their respect but one someone does achieve that, they win a long life and trustworthy companion. Virgo people combine hard work with originality and great results are never late for them. Those born under this sign are also socially aware, considerate and thoughtful.

Negative traits: These natives are worrisome and circumspect and also overly belittling. This is a time bomb for them and they sometimes lose their cool and act in a very surprising way without really accepting why they are reacting the way they do. They are very biased although they don't show it and have forceful beliefs of how people can or can't behave.

Love and Compatibility for September 6 Zodiac

Lovers born on September 6 are affectionate and committed. They leave passion aside in order to build a dependable and trustworthy relationship. They are attracted to persons that are as intelligent and trustworthy as them and even more to someone who is sensible and caring and to whom they can offer support and protection. This single native is focused on the other aspects of life and is never in a rush to commit if he/she doesn't feel it's right.

September 6 Zodiac people seem to be most attracted to the other earth signs: Taurus and Capricorn as they tend to share the same vision of life. In love, Virgo is in a permanent search for someone to nurture, help grow and to whom they can give everything they have and the best to offer this occasion to them is the native born under Pisces. The lover in Virgo is said to be least compatible with Leo. As for the rest of partnerships between the other star signs and Virgo, you know what they say, stars predispose but people dispose.

Navy blue is the color for Virgo zodiac.

This is an elegant but also peaceful color just right to stimulate the focused and analytical native in Virgo. The power color can be used in things around, from clothes, decorations to even the color of the vehicle.

Other colors that are good for people born on September 6 are orange, beige and earth tones.

The sign stone for Virgo zodiac is the dignified Sapphire.

This birthstone is thought to reveal and enhance only the positive innate characteristics of an individual, therefore making these Virgo natives even more careful and analytical. Sapphire also symbolizes reliability and sincerity.

Other sign stones that are considered to influence people born on September 6 are Amethyst and Peridot.

Morning Glory is the flower of choice for Virgo zodiac.

Morning Glory symbolizes an affectionate and reflecting nature. This is a tidy flower growing exactly where planted just as the attentive Virgo organizes everything around.

Other flowers considered to bring luck to people born on September 6 are Clover and Poppy.

Platinum is the metal of choice for Virgo zodiac.

Platinum symbolizes inner strength, power and wealth. Being one of the rarest metals on Earth it is associated with exclusivity and prestige.

Another metal considered lucky for Virgo is Mercury.

Those born on September 6 are amazing at getting the things right the first time. They are so focused and detail oriented that they cannot possibly make any mistake but if they do, they fix things immediately. When it comes to family and love life, perfectionism is the foundation but they can also fall desperately in love with not necessarily the right person for them. Their point of view about the financial aspects of life is that they need to keep moving forward and that saving is essential. In regard to health, they are very conscious about it and at times overly hypochondriac.

At which of the four do you believe people belonging to September 6 are most successful? You can answer this poll and see what others think:

What’s the luckiest feature of the September 6 Zodiac Sign?

September 6 Zodiac belongs to the second decan of VIRGO (September 3-September 13). This decan is strongly influenced by the planet Saturn. This is representative for people who are meticulous and dependable just like Virgo and opportunists just like Saturn. This period is said to temper the characteristics of the Virgo zodiac sign.

Being born on the 6th day of the month shows a perseverant individual who is also generous, tender and caring. The numerology for September 6 is 6. This number reveals responsibility, affection and a domestic approach to life. Those Virgo associated with the number 6 enjoy spending time with families and building a safe environment for those they love.

September is the ninth month of the year, bringing the return to education and careers after the long summer. Those born in September are analytical and decisive. September 6 Zodiac people are orderly and modest. September has as representative symbols the Morning glory and Aster as plants and the Sapphire and Sardonyx as gemstones. The name of this month comes from the Latin “septem”.

What statistics say about September 6 Zodiac?

In the Gregorian Calendar, September 6 appears as the 249th day of the year or the 250th day in case of leap years and there are 116 days left until the end of the year. The sixth day of autumn, this is also the Pregnancy and Infant Loss Remembrance Day.

Virgo as a common occurrence in the birth signs list is placed second. An even numbered sign, this is full of negative polarity and attached to a feminine symbolism. This is suggestive for introvert natives who are meditative and quite unsociable. One of the archetypes used to characterize this sign is the Nature Spirit. This was rated as the sign with the most educated natives but is also included in the chart with natives that have less babies than average.

Does the information on September 6 zodiac describe you?