Being a Virgo born on September 8th, you have a generous and practical nature. If anyone has you in their family, then surely they won't get into any trouble, and, even if they do, you will be there to support them.

You are modelling a lot of your behaviour by that of those around you so it is quite important who you surround yourself by. Get ready to better understand your horoscope personality below.

Astrological symbol: Maiden. This relates to thinking clarity, shyness, a calm nature peaceful and accomplished. This is the symbol for people born between August 23 and September 22 when the Sun is considered to be in Virgo.

The Virgo Constellation is one of the twelve constellations of the zodiac, with the brightest star being Spica. It is the second largest in the sky covering an area of 1294 square degrees. It lies between Leo to the West and Libra to the East, covering visible latitudes between +80° and -80°.

In Italy it is called Vergine and in Greece goes by the name Arista but the Latin origin of the September 8 zodiac sign, the Virgin is in the name Virgo.

Opposite sign: Pisces. This suggests help and expansion and shows that cooperation between the Pisces and Virgo sun signs is thought to be beneficial for both sides.

Modality: Mobile. This modality of those born on September 8 proposes artistic sense and humor and also offers a sense of their philosophical nature.

Ruling house: The sixth house. This zodiac placement governs over services, work tasks and health. It reveals the areas that attract the attention of Virgos the most.

Ruling body: Mercury. This association reveals experience and creativity. Mercury is known as the messenger of the gods in Greek mythology. Mercury also shares an insight on positivity.

Element: Earth. This element represents structure and practicality and is considered to influence confident and polite people under the September 8 zodiac sign. Earth models things in association with water and fire.

Lucky day: Wednesday. As many consider Wednesdays as the most pure day of the week, it identifies with the graceful nature of Virgo and the fact this day is ruled by Mercury only strengthens this connection.

More info on September 8 Zodiac below ▼ 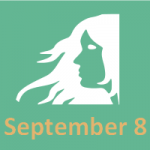 People born on September 8 are meticulous, trustworthy and have a great sense of duty. Just like a true Virgo, they are lively and friendly. They attract reliable and hardworking people. They like having everything organized up to the last detail and to analyze everything thoroughly. They avoid lazy and showy people. Those born under this sign feel best when surrounded by intelligent, refined and diplomatic people.

Positive traits: These natives are some of the progressives of our days as they always seem to keep an eye on what's happening next. They also keep the other eye on the past so they often learn what they have to learn at the right time and rarely repeat the same mistake twice. They are revolutionary and detailed and people of authority are always satisfied with their results but they are often so modest that they don't speak for themselves.

Negative traits: Stop worrying so much and start taking some risks from time to time is one thing Virgo needs to learn. Those born on this day are anxious and worrisome. They tend to over think even the smallest problems and this attitude is taking all the unpredictable and fun out of their lives. They are sometimes intolerant and fastidious. They disagree with all the vices of others although they do forget to analyze their own.

Love and Compatibility for September 8 Zodiac

Lovers born on September 8 are loyal and affectionate. They may not be those partners with whom you party and go on crazy adventures but they sure are those with whom you want to settle. They see a relationship as the union between two souls and are 100% committed once they take settle. They are attracted to intelligent and trustworthy persons whom can offer the same degree of reliability as them. You can conquer the heart of Virgo by being an honest and supportive partner.

September 8 Zodiac people are most attracted to the other earth signs: Taurus and Capricorn as they tend to share the same vision of life. In love, Virgo is permanently seeking for a person they can take care of, help grow and support for better or worse and the best to offer this occasion to them is the native born under Pisces. The lover in Virgo is said to be least compatible with Leo. As for the rest of partnerships between the other star signs and Virgo, you know what they say, stars predispose but people dispose.

The color considered to be representative for Virgo natives with September 8 is navy blue.

Navy blue symbolizes depth, strength and refinery. This zodiac color is advised to be used in accessories and items of clothing.

People who have navy blue as sign color are creative, attractive and moody. They also have their moments of introspection and revelations. This is a rich and refined hue that stimulates but also sooths the elegant and analytical native in Virgo.

The lucky Virgo birthstone for those born under the September 8 is represented by the sharp Sapphire.

This is a precious stone that symbolizes honesty and dependability. This zodiac birthstone is advised to be used in pendants and earrings.

This gemstone is said to be able to alleviate all kinds of pain and also to improve any blood or glandular condition. The most valuable hues are medium to dark blue Sapphires.

Morning Glory is the flower said to be representative for Virgo people born with September 8.

Morning Glory is a known symbol of reflection and affection. The zodiac flower could be used in gifts and decorative items.

This is a neat flower, growing exactly where planted, just as the attentive Virgo organizes their life space. This flower is to be found during early summer mornings.

Other plants that suit Virgo natives are Clovers and Poppies.

Platinum is the metal of preference for Virgo natives, especially those born under the September 8.

Platinum is a metal that suggests power and wealth. This zodiac metal should be used in bracelets and other accessories.

Another metal considered lucky for Virgo natives is Mercury.

Those born on September 8 are great at organizing and keeping everything neat and precisely arranged. Such an attentive Virgo can only be very good at building strong and empathic relationships but they also make great friends with their partners. They make great researchers, executives and analysts. Their health is quite good but since Virgo rules the abdomen, intestines, liver and corresponding arteries, they are susceptible to suffering from affections concerning these areas and the skin.

The below poll tries to reveal which do you think is the most successful area in the life of people belonging to September 8:

What’s the luckiest feature of the September 8 Zodiac Sign?

September 8 Zodiac belongs to the second decan of VIRGO (September 3-September 13). This decan is influenced by the planet Venus. Those born under this influence combine the attention and hard work of Virgo with the financial wisdom of Saturn. This period tempers the positive and negative characteristics of the Virgo zodiac sign, slightly enhancing the positive ones.

Being born on the 8th day of the month shows enterprise, imagination and responsibility and dedication as a leader. The numerology for September 8 is 8. This number reveals ambition and great power but also an embrace of the spiritual side, later in life. Those Virgo associated with number eight pragmatic and analytical doers in all life matters.

September is the first autumn month in the Northern Hemisphere, bringing the return to education and careers after the long summer. Those born in September are motivated and analytical. September 8 Zodiac people are cautious but understanding. The symbols for September include the Sapphire and Sardonyx as gemstones and Aster and Morning glory as plants. The name of this month comes from the Latin “septem”.

What statistics say about September 8 Zodiac?

In a year in the Gregorian Calendar, September 8 is the 251st day or the 252nd day in case of leap years and until the end of the year there are left 114 days. The eighth day of autumn, this is also the International Literacy Day as recognized by the UNESCO.

Virgo is placed second on the list with the popularity of zodiac signs in terms of occurrence. Exuding feminine symbolism but also a general negative polarity, this is also considered of even number. This is defining for introvert natives who are contemplative and self-supporting. Amongst the archetypes used to describe this sign there is the Perfectionist. This is the sign with most educated natives but also with the least number of babies in families where one parent is Virgo.

Does the information on September 8 zodiac describe you?